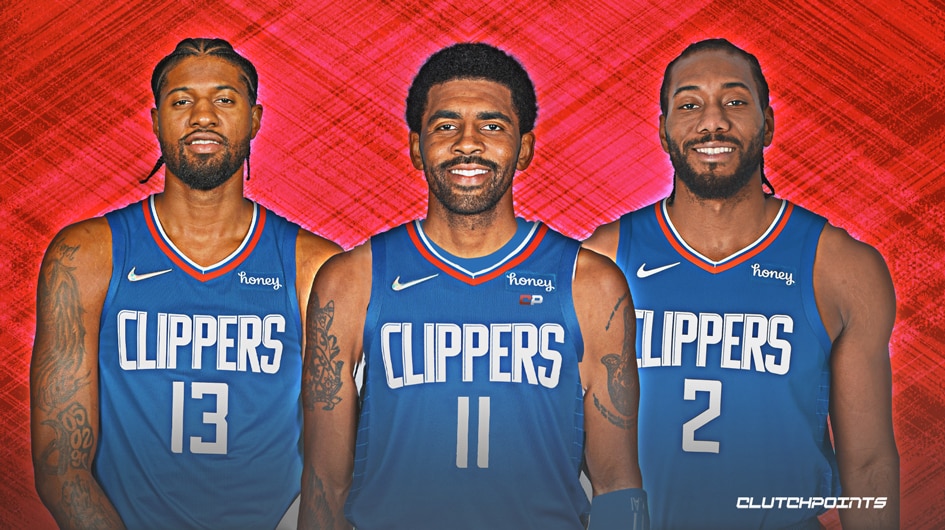 The LA Clippers are in prime position to contend for the 2023 NBA Championship. With Kawhi Leonard and Paul George both healthy, the team is expected to make a deep playoff run, with many betting on them to win the whole thing. How much further could this team go if they were to somehow acquire Kyrie Irving from the Brooklyn Nets?

A report from The Athletic on Monday stated that the Brooklyn Nets and Kyrie Irving were at an impasse regarding contract negotiations. Additionally, it was reported that the New York Knicks, Los Angeles Lakers, and LA Clippers were all named as interested suitors should Irving become available via a trade.

In the first of a two-part series, we’ll look at why Kyrie Irving is a perfect fit for the Clippers and three reasons why they must go hard in pursuing a trade for him. The second part, which will be posted later today (Tuesday) will make the case against the Clippers trading for Irving.

3. Ty And the Ties Within

Kyrie Irving already has significant ties to members of the LA Clippers organization. Clips Nation’s Justin Russo did a fantastic job compiling the list of Clippers who also have a history with Irving.

. Tyronn Lue, Irving’s former coach from Cleveland is the head man for the Clippers, and the two did win quite a bit together
. Jay Larranaga, who was an assistant coach in Boston and with Team USA when Irving was there, is also on the Clippers’ staff
. Shaun Fein, the Clippers’ player development guru, was with the Nets during Irving’s first year in Brooklyn
. Clippers’ assistant Larry Drew, a mentor and close friend of Lue’s, spent several years in Cleveland with Irving
. Player development coach Dahntay Jones was a teammate of Irving’s in Cleveland
. Trent Redden, the assistant general manager for the Clippers, was in the Cleveland Cavaliers front office when they selected Kyrie Irving first overall in 2011

The Clippers being mentioned as a potential suitor for Kyrie Irving shouldn’t be too shocking. There are a lot of Irving ties on the team, as I wrote about a month ago: https://t.co/VWWKwtUY2q https://t.co/tVe43AVst8 pic.twitter.com/d0STjcbleI

While it doesn’t necessarily mean much in terms of whether a trade goes down or not, the amount of people who have had on-hand experience dealing with Kyrie Irving is staggering, especially within a single organization. At the top of the list is coach Tyronn Lue, who led Irving and the Cavs to the 2016 NBA Championship.

Additionally, Irving reportedly wanted Lue to become the Brooklyn Nets head coach back when they had an opening in March of 2020. Tyronn Lue was an assistant with the LA Clippers back then, but the interest was reportedly there.

If anyone could bring the best out of Irving while managing him to the best of his ability, it’s Tyronn Lue.

The LA Clippers enter the 2022-23 NBA season with a surplus of depth at almost every position. That’s led many to believe some players could be seen as expendable, especially if it meant landing a big piece in Kyrie Irving.

Depth is always needed for a team planning to make a deep playoff run, if only to get through the regular season as healthy as possible. At the moment, the Clippers seemingly have a lot of players capable of playing, but not a lot of minutes to go around.

Nicolas Batum is expected to re-sign with the team in free agency, and it’s believed that Isaiah Hartenstein isn’t far behind.

That means the team’s current depth chart looks a little like this:

The Athletic report from Monday morning suggested that any two or three of Norman Powell, Marcus Morris, Luke Kennard and Reggie Jackson would technically satisfy the CBA’s trade rules. It’s believed the Clippers would need to send a young player like Terance Mann or Brandon Boston to ‘sweeten’ the deal, the report added.

It’s very likely the Clippers don’t include Norman Powell in any trade scenarios, but if they were to, they would be adding a player in Kyrie Irving to a position of need while still maintaining their depth at the remaining guard and forward spots.

Throughout the season, it’ll be hard to find minutes for every single one of these players. Now, knowing Tyronn Lue and what the Clippers plan to do, the depth will allow a lot of rest days and opportunities to stay fresh throughout the season. Trading for Irving would shore up a bit of that depth, but would give some much-needed on ball juice that would relieve both Kawhi Leonard and Paul George of their playmaking/scoring duties.

1. Kyrie Irving Is The Ultimate Bucket-Getter

The best and biggest case to make for the Clippers pulling the trade for Kyrie Irving is just that: You’re getting Kyrie freakin Irving.

Forget about all the off-court issues you may have heard regarding Irving over the last few months. Kyrie Irving is one of greatest offensive talents the NBA has ever seen. His ability to score the basketball can sometimes be absolutely mesmerizing to watch as an objective fan of the game.

When the playoffs come around, teams usually shorten up their rotations and go six or seven, maybe eight deep. With the depth the Clippers currently have, some legitimately good players may not even see the court. And in tight playoff situations when you need to get a bucket badly to either stop an opponent’s scoring run or breathe some life into your own team, Kyrie Irving is the exact type of guy you want on your side.

If you’ve watched the Clippers the last few years, you’ve known just how prone they are to those frustrating scoring droughts. Having a guy like Irving should drastically help cure some of those woes.

Kyrie Irving has averaged over 22 points per game for the Nets the last two postseasons on 47 percent shooting from the field, 37 percent from three, and 96 percent from the free throw line. He’s played in three NBA Finals from 2015 to 2017, winning one of them.