After years of being stuck in the middle, the Orlando Magic have finally made a move towards rebuilding this season. With the departure of Nikola Vucevic, Aaron Gordon, and Evan Fournier, the franchise is now full-steam ahead with its youth movement until the regular season ends. At the forefront of that movement are names card fans are very familiar with. Some of these include Markelle Fultz, Jonathan Isaac, Mo Bamba, Cole Anthony, and Wendell Carter Jr. Among those players who are showing flashes of potential for the Magic is one who sat out his entire rookie season last year — Chuma Okeke.

The 22-year old power forward was the 16th pick in the 2019 Draft. Prior to that, Okeke played two seasons for Auburn University, where he posted 12 points, 6.8 rebounds, and 1.9 assists during his final year there. Unfortunately, he suffered a torn ACL during the 2019 NCAA tournament, which sidelined him for the entirety of his NBA rookie season.

This year, Okeke is fully healed and showing the league what exactly he can do. Card fans are also taking notice of this young player as he starts to get more playing time on the court. We examine the main reasons why collectors should be high on Okeke and start investing in his cards as early as now.

The emergence of Okeke as the Orlando Magic starts to rebuild

The Magic you’ve known for the past few seasons are no more. In its place is a roster filled with young, promising, yet unproven talent. Among those who will be called upon to spearhead Orlando’s youth movement is Okeke. Through 31 games, the rookie is posting 6.1 points, 3.7 rebounds, and 1.9 assists in 22.6 minutes per contest. That number potentially can go up with the availability of more playing time for Okeke.

Chuma Okeke did not disappoint in his first start after the trade deadline opened up a huge role for him with the Magic:

Taking a look at Orlando’s roster and you’ll see that there are only four forwards – James Ennis, Otto Porter Jr., Jonathan Isaac, and Okeke. Isaac is currently injured while Porter doesn’t fit the Magic’s timeline. This situation is heaven-sent for Okeke who, potentially, can permanently nab the starting power forward spot for the rest of this season and the next.

If this happens, Okeke will finally get the chance to fully develop by getting all the minutes he needs on the court. In turn, his stock in the card market will steadily climb up as more people notice his progress.

Getting quality defense and a serviceable shot from the perimeter is a must for every team these days. The ability to stretch defenses and improve spacing on the offensive end, and contain the opposing squad’s best wing is a talent at the same time is something Orlando sorely needs. Fortunately, Okeke has what it takes to give that to his team.

𝐅𝐮𝐧 𝐅𝐚𝐜𝐭𝐬:@chuma_okeke has not missed a shot in his last 2 games.

Standing at 6’6” and weighing, 230 lbs., Okeke has the physique and size to be one of the league’s best 3 and D players. During the Magic’s last four games, he posted averages of 17.8 points, 2.3 dimes, and 5.8 boards per outing. He also connected 63% of his shots from the field and an astounding 63% from downtown.

On the other end of the court, Okeke is starting to show the league how much of a defensive pest he can be. This season alone, the 22-yeard old boasts a 0.8 defensive box score, which is evident in how he uses his seven-feet wingspan to gets steals or contain his assignment on the court. Rookies usually don’t fare well on defense in their first year in the league. Okeke, it seems, is doing quite alright.

If Okeke continues on this path, he has the chance to surpass what Gordon could have been for Orlando – an elite wing who can stretch the floor on one end and get the defensive job done on the other. This will prove to be a good catalyst, not only for his NBA career but for his stock in the card market as well.

The supply of Chuma Okeke rookie cards isn’t that high

Unlike other members of the 2019 Draft Class, Okeke was never included in most of Panini’s products last year. The only notable rookie cards he has in the market are found in the 2019 Prizm, Donruss, NBA Hoops, and Certified sets. The scarcity of these rookie offerings, coupled with Okeke’s promising future, can bode well for his card value. 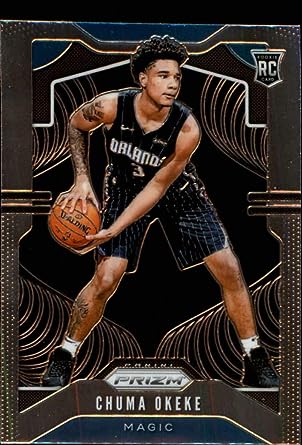 As of now, Okeke is virtually undervalued in the card market. His gem-mint Prizm rookie card, which currently has a PSA population count of 1,199, is currently selling on eBay for around $85. At one point last month, it even reached $30. This price is essentially great for those who want to start investing in Chuma Okeke rookie cards because it wouldn’t cost an arm and a leg to do so.

With the Magic on its way to a full-scale rebuild, Okeke will surely benefit in the process. Card enthusiasts should also keep a close eye on him, especially while his card value is low. If he becomes consistent in posting good numbers, Okeke can become a solid buy for card fans down the road.