Deebo Samuel’s trade request has been one of the biggest storylines in a drama-filled offseason for the San Francisco 49ers. The star wide receiver shocked the NFL world by demanding a trade a few months ago. Fans were anticipating which team would pull the trigger and trade for Samuel after that demand.

Turns out, the 49ers aren’t too keen in trading their best offensive talent that easily. As the NFL offseason ramps up, Deebo Samuel made another shocking move and actually showed up to the 49ers’ OTAs. This was to the delight of Trey Lance, who spoke highly of his veteran teammate in an interview. (via The Wichita Eagle)

“Deebo’s a guy we love to have in the locker room,” said Trey Lance. “I talk to Deebo a ton, even when he’s not here, so it’s obviously good to have him back.”

Lance himself is in the middle of some minor drama within the 49ers. After their elimination in the NFC Championship Game, many fans expected the team to hand the reigns over to Lance next season. However, at the time of writing, Jimmy Garoppolo hasn’t been traded to a team yet at this point. This has led fans to question the team’s plans at QB next season.

Regardless, this offseason is bound to be an interesting one for the 49ers. Unless there’s a home-run deal in place, the team isn’t likely to trade Deebo Samuel. That leaves the team with many questions as they gear up for a potentially tumultuous 2022 season. 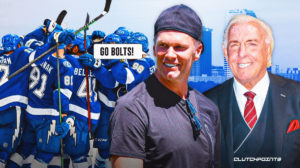 JUST IN: Buccaneers QB Tom Brady wants to rub some of his magic on the Lightning ahead of G2 of Stanley Cup Finals vs. Avalanche
Related Topics49ersDeebo SamuelTrey Lance