One of the more hyped-up Week 1 matchups across the NFL will be the Carolina Panthers vs the Cleveland Browns. Baker Mayfield will not have to wait long to get his revenge on the organization after being shown out the door last season. The former number one overall pick spent four seasons with the franchise and helped snapped the Browns’ 17-season playoff drought during his time there. However, the organization clearly believed it was time to move on and made the off-season addition of Deshaun Watson. With Mayfield ready to lead the team into battle, here are four Panthers Week 1 predictions ahead of the kickoff for the 2022 NFL season.

Holding a grudge is not always healthy, but it can be one of the most motivating factors in this type of athletic matchup. While Baker Mayfield is far from a saint, he has a rightful gripe with the Browns for his accelerated exit from the organization. Mayfield provided the greatest stability at QB the team had seen in many years and is tied with Tim Couch for the 5th most games started by a Browns quarterback despite spending just four seasons there. While last season was not his most impressive performance, Mayfield moved the organization in the right direction during his time and seemingly did not get much praise for it.

Look for the QB to make this known in the opening week matchup and come out ready to throw the ball. Expect Baker Mayfield to play a major role in the Panthers’ offense and for them to allow him to make his mark on the game. The universe has aligned to allow Mayfield to seek his revenge and expect him to deliver by throwing at least three touchdowns against his former team.

While Baker Mayfield may be the man under center this season, Christian McCaffrey will remain the focal point of the Panthers’ offense. There are no questions about the talent of the All-Pro running back, it is just a question of if he can stay on the field. McCaffrey has played a total of just 10 games in the past two seasons due to injuries.

The Stanford product is healthy and is expected to be a full go for Week 1 of the 2022 season. Expect the Panthers to use their best offensive weapon often and for him to play a role in both the rushing and receiving game. In his last fully healthy season in 2019, Christian McCaffrey led the entire NFL with 403 touches and 2392 yards from scrimmage. While he may not eclipse this type of usage, expect McCaffrey to touch the ball a great deal in Week 1. 160 yards from scrimmage is a mark he can be expected to clear.

It will take a strong effort on both sides of the ball if the Panthers are going to reach their expectations this year. When looking at the Carolina defense, Brian Burns is a great place to start. The 24-year-old has impressed through his three seasons in the NFL and earned his first Pro Bowl recognition in 2021. The defensive end recorded nine sacks for the second straight season and the team is hoping he will take another step forward this season. The Panthers will especially be leaning on Burns to help in the pass rush game considering they lost Haason Reddick in free agency who led the team with 11 sacks last year.

This effort will begin in Week 1 and look for Brian Burns to get out on the right foot. The Browns allowed the sixth-most sacks as a team last season so there could be an opportunity for him to get in the backfield. While Clevland will likely be fairly conservative in their play call, expect Brian Burns to make his presence felt by recording two sacks.

1. Panthers get the win

Both teams will be itching to start the 2022 season out on the right foot, but expect the Panthers to come out on top. Neither team is expected to make any serious noise this year, but Carolina should be considered the more complete team especially considering Jacoby Brissett will be under center for the Browns.

Between the home field advantage and Baker Mayfield’s desire for revenge, all signs are pointing toward the Panthers starting off the season 1-0. Mayfield will be a name to watch this year as he looks to rebound his value and prove his worth around the NFL. The quarterback competition in Carolina was ultimately answered as Sam Darnold suffered a high ankle sprain that will keep him out for the first few weeks of the season. This provides a terrific opportunity for Mayfield to prove his ability and earn some trust as a potential long-term starting quarterback. This all starts with a strong Week 1 performance and for the Panthers to get the opening week win. 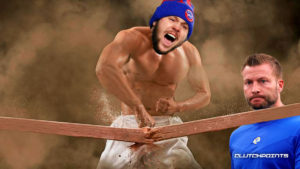