The LA Clippers are expected to enter the 2022-23 NBA season as one of the frontrunners for the NBA Championship. With Kawhi Leonard and Paul George both expected back healthy for the start of the season, many have high expectations for the Clippers again. That includes Metta Sandiford-Artest.

Kawhi Leonard has been out since June 14th, 2021, when he suffered the torn ACL in Game 4 of the Conference Semifinals against the Utah Jazz. He would go on to miss the remainder of that postseason and, despite rumored optimism that he could return during the season, missed the entire 2021-22 campaign as well.

Despite not having played on an NBA court in 16 months, Metta Sandiford-Artest believes Leonard still has what it takes to show how special he is.

When informed that Leonard was also named to the NBA’s 75th Anniversary team, the NBA’s list naming the 75 best players of all-time, Metta Sandiford-Artest’s shock turned into appreciation.

"I wanna see Kawhi back. I'm not playing. Hopefully he comes back with a vengeance… He's incredibly special."@MettaWorld37 says he’s excited to see Kawhi Leonard back for the Clippers.

Kawhi Leonard has been taking his time recovering from the ACL tear, with both his medical staff and the team’s playing it safe. If the team can stay healthy, they’re expected to play well into May of 2023, and possibly even June.

Still, it is somewhat unclear what to expect from Leonard’s return. Many players who have suffered the injury have bounced back well, but have needed a few months — often times even a year — to fully regain their previous form. That being said, it might play into the Clippers’ favor that they proceeded with caution, ensuring Leonard is as close to his old self as possible.

In a recently posted video by the LA Clippers social media team, Kawhi Leonard looked like he’d bulked up, specifically around his legs.

The NBA’s regular season is set to tip off in about 10 weeks, with Media Day and training camp only six weeks away. We’ll know a lot more about Kawhi Leonard and the Clippers’ plan for him then. 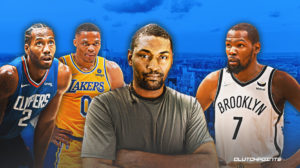