Evolution of Bronny James through photos

With three championship rings and 12 All-NBA First-Team selections, Los Angeles Lakers superstar LeBron James is widely viewed as one of the greatest basketball players the NBA has ever known. Though he’s playing in his 17th season of service, The King is showing little to no signs of regression. And now his oldest son, Bronny James, is making a name for himself as well.

In this piece, we’ll take a look back at Bronny’s rise to fame.

Bronny James was born in Akron, Ohio on Oct. 6, 2004 to Savannah Brinson and LeBron James, who were sweethearts at St. Vincent-St. Mary High School.

As a child, it quickly became evident that Bronny was instilled with his father’s athletic drive. He played several sports, including basketball and soccer. However, LeBron did not let his son play football due to safety concerns.

It wasn’t long until Bronny was on the sidelines cheering his father on. 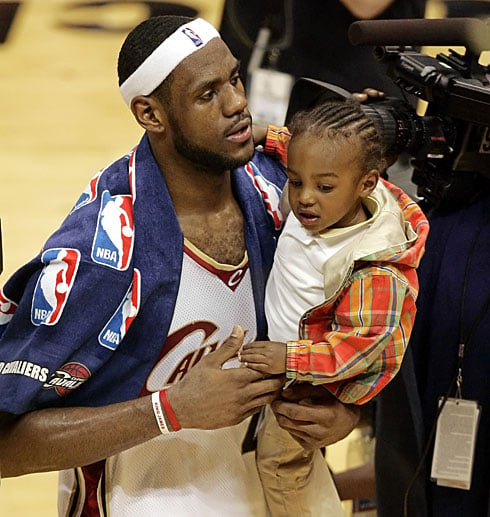 Bronny went on to compete with several AAU basketball teams before high school. His first major jump onto the scene came as a 9-year-old, when he led the Gulf Coast Blue Chips to a fourth-grade championship at The League Dallas/Hype Sports Summer Jam.

By the time he was 11 and in fifth grade, Bronny’s game was beginning to take shape. It was clear that he had great court vision (just like dad) and a solid handle. As a result, he started receiving more and more attention from the media. In fact, some of his AAU highlight videos now have millions of views.

With his father joining the Lakers in the 2018 NBA offseason, Bronny James was enrolled at Crossroads School, which is a private K-12 school in Santa Monica, California. He wasn’t allowed to join the varsity team right away, however, as he was still in eighth grade. In his first game with the school, he dropped a cool 27 points in a 61-48 win over Culver City Middle School. Much to the delight of his fans, the youngster managed to throw down a dunk as part of his debut.

Bronny transferred to Sierra Canyon School in May 2019 to begin his freshman year of high school. Alongside five-star recruits BJ Boston and Ziaire Williams, as well as Zaire Wade, son of Dwyane Wade, the team was viewed as one of the top programs in the nation. Notably, ESPN aired 15 of their games.

Now 15 years of age and standing at 6-foot-2, Bronny James is drawing even more attention from collegiate scouts. If he manages to make it to the NBA, he and his dad would be the first active father-son duo in the history of the league.

“Through the grace of God and the grace of health, we will see what happens,” LeBron told Yahoo Sports in December when asked about the possibility of playing with his son in the NBA.

“But at the end of the day, it’s not promised my son can make it to this level. We don’t even discuss that.

“We live every day by every day and [think about] how he can continue to be a great teammate, be a positive role model to his little brother and little sister and, when he leaves the house, continue to hold the James last name with the utmost respect.”

Let’s see where Bronny James’ career goes from here. Soon, he’ll be flourishing on his own.