The annual tradition of Jackie Robinson Day will continue this year as it does every year on April 15th, however with a slight twist due to the 75th anniversary of Robinson breaking Major League Baseball’s color barrier when he debuted with the Brooklyn Dodgers.

New twist for Jackie Robinson this year, which will celebrate the 75th anniversary of him breaking the color barrier: All 42s will be “Dodger Blue,” regardless of a team’s primary colors. Here’s the Yankees, as an example … pic.twitter.com/FCCuul0waP

Managers, coaches, and players have all annually donned the iconic No. 42 in mid-April, with this year’s version colored in Dodger Blue. Every uniform that day, regardless of the team’s color scheme, will have the blue 42.

Jackie Robinson’s wife, Rachel Robinson, released a statement regarding all of the tributes being planned this season. “Our family is thrilled to see the many wonderful tributes to Jack’s historic moment 75 years ago,” Rachel Robinson said. “We will continue to honor his memory and legacy through our work with the Jackie Robinson Foundation. We are proud to have Major League Baseball and so many others as supporters of the young men and women we impact each year.”

Robinson was the 1947 National League Rookie of the Year and earned the Most Valuable Player award just two years later. He was inducted into the Baseball Hall of Fame in 1962. The Los Angeles Dodgers, who have a statue of Robinson at the center-field entrance of Dodger Stadium, are planning on honoring Jackie Robinson in their own way at a later date. On April 15th the Dodgers are set to take on the Cincinnati Reds at home, and will also host the MLB All-Star Game on July 19. Coincidentally, Rachel Robinson turns 100 on that same day. 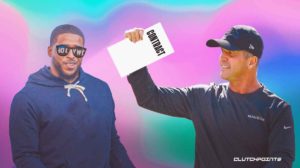