Jazz news: Donovan Mitchell draws flak from Chinese fans after sharing IG video of making them wait during a meet-and-greet

The NBA is more of a global game than ever, and because of this more players have been spending time overseas during the summer. China has become a hot spot for players, Utah Jazz star Donovan Mitchell has been touring Shanghai and Harbin to promote his Spider-Man-themed Adidas sneakers. However, an Instagram post by the 22-year-old has some Chinese fans angry.

Mitchell posted a video to his Instagram in which he called autograph seekers “persistent.” 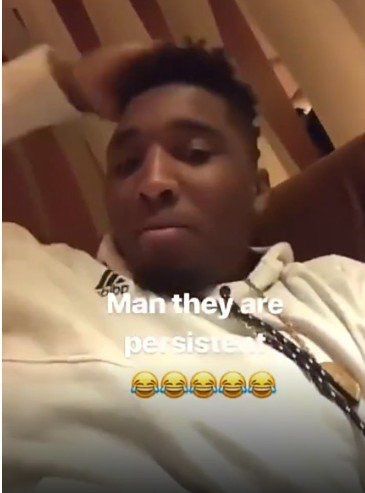 This led Chinense sports commentary site Hupu to call Mitchell disrepectful. A clearly tired Mitchell sits in what seems like a hotel lobby saying, “Man, I’m just out here on this couch. They just out here chillin’”, panning the camera around to show a group of Chinese fans a few feet away. “They been out here since, like, in the morning,” he adds.

Posted as a story, the video is no longer available on his page, although many other posts from his trip where Mitchell appears much more active, engaged and excited are available. Instagram is blocked in the country, but can be accessed, and some chinese fans have criticized Mitchell in the comments for his perceived ungratefulness.

Mitchell averaged 23.8 points per game during last season. For the second year in a row, his Jazz went into the playoffs as the fifth seed, but fell to the Houston Rockets in five games. However, this offseason Utah added point guard Mike Conley and wing Bojan Bogdanovic.

Missunderstandings are bound to happen when disparate cultures crossover, and Mitchell is far from the first player to spark controversy in China. Just last month Rockets’ guard James Harden, another Adidas athlete, was pulled over by Shanghai police while riding a scooter around the city. Harden reportedly had his scooter confiscated by the authorities, an apologized while stressing the importance of staying safe on the road.

Terrelle Pryor would like to resurrect NFL career with Steelers

Cristiano Ronaldo’s net worth in 2020

5 people who should buy the New York Knicks