Josh Allen is one of the best quarterbacks in the NFL. The 25-year-old, who is the starting quarterback for the Buffalo Bills, has been in the league since 2018. His path to the NFL, as his story in professional football as well, is very interesting. He did not have a rose-paddled path into the league and it is important to know how that lead him here. Regardless of the path, Allen is now here and it changed his life in many ways. To explore one aspect that was changed, let’s dig into Josh Allen’s net worth in 2022.

Josh Allen’s net worth in 2022 is $14 million. This is according to numerous outlets, including Celebrity Net Worth. Obviously, the majority of that money comes from his NFL contract, but Allen is also a fairly popular player. The Bills quarterback does a lot of endorsements and stays active outside of his NFL paycheck. As said in the beginning, he has an interesting story that led him to the NFL, and it is worth exploring it completely.

Josh Allen was born in 1996, in Firebaugh, California. Interestingly enough, he was actually born and raised on a huge cotton farm, just outside Fresno, California. Since it was a fairly small city, Allen started looking for interests outside of Firebaugh, choosing to spend most of his free time in Fresno, watching their football games. He even attended their football camps, but without much luck.

Even though Allen was a standout high school player, he garnered no attention from schools in the nation. Before he graduated high school, he got no scholarship offers, mostly due to the fact that he decided not to concentrate on one sport. He played baseball, basketball, football, worked on the farm with his parents, and helped his mother with a restaurant where she was working. Unfortunately for Allen, that all meant that he had to settle for Reedley College, a local junior college where his football path continued.

After a season at Reedley, he transferred to the only school that offered him a scholarship at the time – the University of Wyoming. Unfortunately, disaster struck him in just his second game for the Cowboys, as a broken collarbone kept him off the field for the entire season. In his second season with the Cowboys, Allen was playing so well that he even contemplated declaring for the 2017 NFL Draft, but decided to remain at Wyoming one more year. After his final season, he declared for the draft and it was time to prove his worth in the NFL.

He was selected 7th by the Buffalo Bills, the franchise he is still playing for. He had two other quarterbacks as competition until one was traded to the then-Oakland Raiders. Still, the Bills were not ready to give the reins of the offense to Allen just yet, so he was a backup to Nathan Peterman. That only lasted for one week, as Allen captured a spot as starting quarterback in Week 2. His first season was not too bad, individually, with a 5-6 record as a starter and one minor elbow injury that set him back. The Bills could not recover from missing Allen, so the record of the squad was 6-10 overall.

His second season was much better, as the Bills were able to have a 10-6 record and make the NFL postseason. It was another great year for Allen, who tasted his first postseason as an NFL starter. In their single game in the playoffs, the Bills faced the Houston Texans and lost 22-19 in an OT thriller. The third, 2020 NFL season, was by far the best one for Allen. He was Second-team All-Pro and a first-time Pro-Bowler. On a collective level, his Bills made the playoffs once again, winning 13 games in the regular season. In the Wild Card game, they beat the Colts, then bested the Ravens, just to be eliminated in the AFC Championship by the Kansas City Chiefs.

This year, Allen led the Bills to a slightly worse record at 11-6, good enough for the third spot in the AFC. They will be facing the New England Patriots in the Wild Card game. The Bills are certainly hoping that their quarterback will be leading them to a deep playoff run once again, as he did last season.

In terms of him specifically, Allen has not been shy in the endorsements field. He has a contract with Nike and is one of the biggest brand ambassadors for the New Era Cap Company. Other than that, he has done promotional work for various companies, such as Hyundai, Microsoft, and various golf-related businesses. Most interestingly of all, he actually has his own cereal, called Josh’s Jaqs.

Were you at all stunned at Josh Allen’s net worth in 2022? 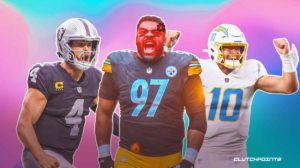