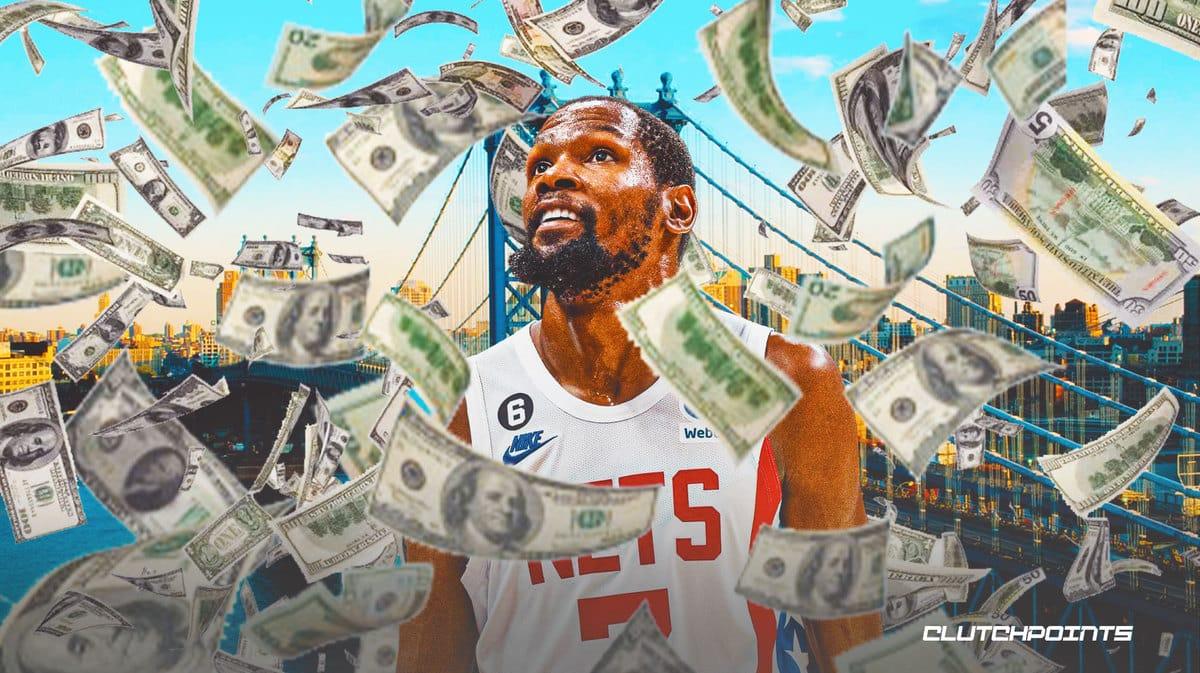 Kevin Durant’s net worth in 2022 is $200 million. This is according to reputable outlets such as Celebrity Net Worth.

Kevin Durant was born in Washington, D.C., U.S. He initially studied at National Christian Academy and played for the school’s basketball team. However after two years, he transferred to Oak Hill Academy. Durant wrapped up his high school education at Montrose Christian School.

After graduating high school, Durant was being recruited by several college basketball programs including North Carolina, Kentucky, Louisville and Texas. Durant would go on to attend the University of Texas and play for the Longhorns. As a freshman at Texas, Durant averaged 25.8 points, 11.1 rebounds and 1.3 assists per game.

After a single season in University of Texas, Durant declared for the 2007 NBA Draft, where was selected by the Seattle Supersonics with the second overall pick. The Supersonics’ top pick signed a four-year contract, worth $19.5 million.

Although he wasn’t the top overall pick, Durant proved early in his rookie year that he was a future superstar. Durant averaged 20.3 points, 4.4 rebounds, and 2.4 assists per game in his debut NBA season, winning Rookie of the Year and being named First Team All-Rookie.

After being unable to source funds for a new area in Seattle, the Supersonics relocated to Oklahoma City following Durant’s rookie campaign. As a result, the Seattle Supersonics changed their name to the Oklahoma City Thunder. Despite his team’s relocation and change of name, Durant emerged as one of the most unstoppable scorers in the NBA.

He averaged 25.1 points per game in his sophomore year, followed by a 30.1 point average in his third year in the league, enough for his first scoring title. In the process, Durant also made his first All-Star appearance. He subsequently signed a five-year, $88 million contract extension with the Thunder.

Durant went on to win the scoring title three more times in Oklahoma City, also taking home MVP honors in 2014. His biggest achievement with the Thunder, though, came two years earlier. With Durant spearheading the squad, an extremely young Oklahoma City squad advanced to the NBA Finals, where they fell to LeBron James and the Miami Heat.

Durant remained in Oklahoma City through the 2015-2016 season. During free agency the following summer, he shocked the basketball world by signing with the rival Golden State Warriors on a two-year, $54.3 million deal, joining forces with two-time reigning MVP Stephen Curry.

Critics swarmed Durant, as it was the Warriors who eliminated the Thunder after the latter blew a 3-1 lead in the Western Conference Finals. Moreover, Durant joining the Warriors tipped the balance of the league, as they won a record 73 regular-season games in 2015-16 before falling to James and the Cleveland Cavaliers in an instant-classic NBA Finals.

Despite joining a Warriors team with a lot of star power, Durant proved that he was the missing piece to their unstoppable dominance. In three seasons with the Warriors, Durant led the team to three straight Finals appearances, capturing both of his championships and Finals MVPs in rematches against James and the underdog Cavaliers.

In the 2019 NBA Finals, Durant and the Warriors had ample opportunity to achieve a three-peat. Unfortunately, injuries to Klay Thompson and Durant dampened their chances. In fact, Durant suffered an Achilles injury that took him out of the 2019 Finals and the entire 2019-2020 season.

Despite his injury, Durant left the Warriors after a playoff run marred by injuries. The two-time NBA champion signed with the Brooklyn Nets on a four-year, $164 million contract, joining forces with Kyrie Irving. After sitting out the 2019-2020 season, Durant made his anticipated return a season later. He made an immediate impact by averaging 26.9 points, 7.1 rebounds and 5.6 assists per game.

With Durant proving that he’s back to full form, the lethal scoring forward was rewarded in 2021 with a four-year contract extension worth $198 million. With Durant at the helm, the Nets are expected to contend for a championship as long as he’s healthy.

Durant has been one of the NBA’s highest-earning endorsers since early in his career. He has worked with notable brands including Gatorade, Degree, Google, Alaska Air Group, 2K Sports, Beats By Dre, Panini America and Nike. Approximately, Durant earns $35 million annually from endorsements alone.

In 2007, Durant inked a seven-year, $60 million shoe deal with Nike. It was the second largest endorsement deal for an NBA rookie at that time. However, he did turn down Adidas’ more lucrative offer of a seven year, $70 million contract. Once his Nike contract expired, Under Armour floated a 10-year, $265 million offer to Durant. However, the MVP still decided to stay with Nike after signing a more lucrative $300 million deal.

Apart from playing basketball, Durant also engages in other endeavors. For one, he is also a successful investor, owning stakes in companies such as Postmates, Acorns and Thirty Five Ventures. Durant’s investment in Postmates allowed him to earn $15 millionafter Uber’s acquisition of the food-delivery service.

Moreover, Durant is also an actor and producer. He has appeared in various series and movies including Thunderstruck and Billions. Through his production firm, Durant has also produced projects such as Q Ball, The Boardroom, Swagger and many more.

Nevertheless, were you at all stunned by Kevin Durant’s net worth in 2022?