When you think about the Los Angeles Lakers, the first guy you think about is LeBron James. A constant in GOAT conversations, James’ presence turned the Purple and Gold’s fortunes around when he arrived. For most people, he is the biggest piece in LA’s championship aspirations, and for good reason.

For new Lakers coach Darvin Ham, though, that isn’t the case. Instead, Ham believes that Anthony Davis, not Russell Westbrook or  LeBron James, is the “centerpiece” of the LA’s title shot. Here’s the coach’s reasoning why he thinks that’s the case. (via All the Smoke podcast)

“This is not going to work without AD. No disrespect to Bron, no disrespect to Russ. They’re going to be who they are. Bron is going to continue to be great, Russ is going to have a much, much better season, but AD, having AD available, especially with the guys we (Lakers) just signed, the young guys, it’s going to be invaluable.”

Essentially, Ham’s argument is that LeBron James is already a known quantity at this point. We know what The King can do, and how far he can take this team. However, Anthony Davis’ production is a little less inconsistent. If the Lakers big man is at 100%, Ham believes that the Lakers will make it deep in the post-season.

It’s not even clear at this point, however, who LeBron and AD’s third partner will be next season. The Lakers have been apparently shopping Russell Westbrook after his disastrous season (to no avail). Will a trade like that make the team better for next season (despite Ham’s insistence)? Only time will tell. 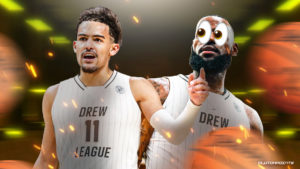