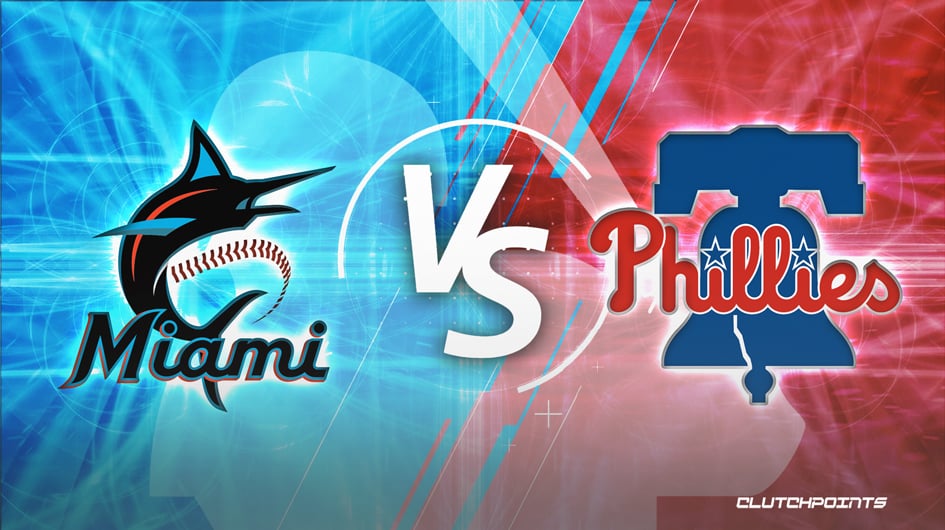 The Miami Marlins will continue a 10-game road trip as they take on the divisional-rival Philadelphia Phillies on Monday night. It is time to continue our MLB odds coverage with a Marlins-Phillies prediction and pick.

The Marlins took two of three games from the Houston Astros at Minute Maid Park. Now, they head to Philadelphia, hoping to gain ground on their divisional rivals. The Marlins are 7-3 over 10 games and have pulled themselves to within five games of the final wildcard spot. Additionally, they are right behind the Phillies in the standings, so taking this series could pay dividends in the playoff race.

The Phillies took three of four games from the Arizona Diamondbacks. The loss on Sunday snapped a nine-game winning streak. This streak included sweeps of the Los Angeles Angels at home and the Milwaukee Brewers on the road. The Phillies are two games ahead of the Marlins in the NL East. It will be the first time the Marlins visit Philadelphia this season. The Marlins took three of four games earlier this year when the two teams met in Miami.

Courtesy of FanDuel, here are the Marlins-Phillies odds:

The Marlins will go with Sandy Alcantara on the mound. Alcantara is 6-2 with a 1.61 ERA in 2022. Moreover, he has pitched lights-out baseball throughout the season. Alcantara tossed a complete-game shutout in his last game. Likewise, he has thrown two complete games in 2022. Alcantara has also reached eight innings in five games. Also, six of his starts have reached seven innings. Alcantara is a top-of-the-rotation guy and has been one of the few pieces keeping Miami alive in the playoff race. He has not allowed an earned run in two straight starts and only one earned run over three starts. Additionally, Alcantara has struck out 28 batters over three games. He has some offensive support from a lineup that has performed inconsistently.

The Marlins are 12th in batting average, 14th in on-base percentage, 16th in runs, 13th in home runs, and 13th in slugging percentage. Some of their top sluggers include Jazz Chisholm, Jorge Soler, and Jesus Aguilar. Chisolm produced two home runs on Friday night, as did Aguilar. Both have emerged as weapons at the top of the lineup. Also, Soler offers some pop with 12 home runs and 29 RBIs.

The Marlins tend to run hot-and-cold with their hitting. They had a productive offensive series against the Astros, which helped them topple the AL-West leaders in Houston. However, the Marlins need their pitching to hold up. The Marlins rank 20th in bullpen ERA and their relievers turned a close game into a 5-run loss yesterday with a terrible eighth inning. Miami’s relievers will look to bounce back against a Phillies lineup that is more than capable of providing late-inning heroics. Alcantara might go deep in this game. If he cannot, the bullpen must hold their end of the bargain.

The Marlins will cover the spread if Alcantara can give them another beautiful start. Additionally, they need Chisholm, Soler, and Aguilar to hit the baseball to generate opportunities. If the bullpen has to work, they must perform better than last night’s affair.

The Phillies will roll with Aaron Nola on the hill. Nola is 4-4 with a 3.50 ERA in 2022. He tossed eight shutout innings in his previous outing, only allowing four scattered hits. Likewise, Nola has reached eight innings in two of three starts. He is finding the strike zone with ease as he has fanned 21 batters over three starts. Moreover, Nola does not allow walks. He did not allow any in his previous start and has not allowed a free base in three starts. This consistency has helped the Phillies strive and achieve. Nola has a great offense behind him.

The Phillies are seventh in the majors in batting average, 12th in on-base percentage, fifth in runs, fourth in home runs, and third in slugging percentage. Bryce Harper and Kyle Schwarber have been terrific, both pounding the baseball out of the yard and all over the field. Harper has 15 home runs and 45 RBIs while batting .316. Likewise, Schwarber has clobbered 16 home runs and 34 RBIs.

The Phillies will cover the spread if Nola can dominate and Harper and Schwarber both pound the baseball. Likewise, the Phillies must find a way to get to Alcantara.

This will be the best match of the day in baseball. Two great pitchers dueling it out. The under is a solid pick to me due to that. Expect a low-scoring pitching gem.