There are hoopers, there are basketball players, then there is Jazian Gortman.

A warning to his fellow ballers: Get to know him now, because he’s coming for you. Without remorse.

“Everybody claim they’re a dog until they see one,” he once said (spoiler: he’s the one).

The 6’2, 175-pound point guard is a rising star of Overtime Elite. You don’t need to watch more than a few clips to understand why: The 19-year-old’s explosiveness is only matched by his intensity and motor. Overtime Elite — if you’re not familiar — just capped off its inaugural season of competition. Over the past half-decade, the company has blossomed from a social media platform (@Overtime) capturing AAU stars and youth basketball circuits into a “transformative”, alternative developmental pipeline for prospects with NBA dreams.

This past season, 27 players were divided into three squads: Elite, OTE, and Overtime. The teams repeatedly squared off amid a rowdy, vibrant atmosphere at a brand-new, state-of-the-art 100,000+ sq. foot facility in downtown Atlanta.

In August of 2021, Jazian Gortman — a five-star recruit with an ESPN Scout Grade of 94 and NBA Draft prospect — became arguably the most exciting prospect to choose the start-up league over college, overseas ball, or the G-League Ignite.

“Today, we landed a critical piece that hits at the core of what we’re building,” OTE head of basketball operations Brandon Williams said upon Gortman’s declaration. “Jazian brings a relentlessness, tenacity, and leadership capability to the OTE family.”

Jazian is certainly appreciative of everything OTE has to offer, but the dynamic guard’s focus is solely — and I mean solely — honing his craft. Here was our exchange when I asked him how he likes to decompress when he’s not putting in work — or if he’d just rather be in the gym 24/7.

So, 9 o’clock at night, you’re sitting at home. What are you doing? He derives his unrelenting, second-nature drive from his family. His father worked numerous jobs (real estate, banking, PepsiCo), and pushed his son to work on his game until he could entertain the idea of joining elite AAU circuits. His mother has been a motivational speaker, professional photographer, and currently runs her own business. He cites his aunt, Shaunzinski Gortman — who played four seasons in the WNBA — and his grandmother as essential role models, too.

“I’ve always been in an environment that shaped me because I know what to expect,” he said about how his upbringing prepped him for his cutthroat fearlessness on the court. “It’s all about competing in that environment. You want everybody to like you, though you compete with everybody, no matter what it is. There’s a lot of competitors throughout the whole hood. Everybody wants to be on the top. Everybody wants to be the best. So that’s how it was.” He labeled one of his middle schools as a “school that if you don’t come ready every day, something’s gonna happen.”

“Growing up in the environment I grew up in, it kinda taught me how to stand my ground and fight your own fights.”

Gortman attended W.J. Keenan High School, not a historical powerhouse. But Jazian had no interest in bailing on his hometown to hoop at some far-off academy.

“We’ve always been known as more of a football state,” he explained to Sports Illustrated. “A lot of people told me I needed to move to a bigger school, play on certain teams and all that, but I liked the idea of putting on for my city. I liked the idea of creating my own lane.”

In his final season at Keenan, Gortman averaged 23.1 points, 5.8 rebounds, and 3.3 steals. However, his coming-out party came the summer before, when his dad deemed him ready to face stiffer competition. He joined Nike EYBL, where he raised his national profile and, more importantly, his self-belief by — unsurprisingly — excelling against the finest talent he had faced to date. Playing for the NightRydas Elite (Fla.), he dropped 30 points at the On The Radar Hoops event, and reached deeper into his bag than he realized he was capable of, to that point. He was, officially, on everybody’s radar.

“I was doing moves people hadn’t really seen before and scoring in every way you could imagine,” Jazian told SI. “That’s when everything changed.”

After his breakout in EYBL — which showcased his ingrained ability to embrace the bright lights and play up (and past) his competition — those NBA dreams suddenly became realistic.

“I kinda realized it in my 11th-grade year…when I was playing for NightRydas,” he said. “I realized how fast I can get up and down the court, my mentality, and just how explosive I am, my wingspan. My ability to play defense on and off the ball. That’s what I wanna focus on and get to the league.” The offers flooded in; Clemson, Ole Miss, Maryland, NC State, Illinois, Texas, Wake Forest, and many more. But Jazian knew OTE presented the pathway he needed to spearhead his development into a two-way force.

His parents were initially skeptical of his decision, but soon understood why it was the appropriate avenue for their über-athletic and equally dedicated son.

In conversation, Jazian Gortman is understated, polite, jovial, and humorous (he’s amusing on social media, too: when I suggested he trademark “A Hundred Grillion,” he cracked that he was “definitely thinking” about it).

On the court, though, he’s a cold-blooded killer.

Gortman’s hops are eye-popping, but it’s his mentality and attitude that really jump out.

“I wanna have that edge, like, explosive edge, like the other guards,” he told me. “I think I’ve always had that in me. I’ve always shown it. When I was younger, I was like a quiet player. But as I got older, I just took it all out.”

Jazian wants the rock in his hands. Without hesitation, he describes himself as a point guard — not a combo guard nor a shooting guard. It’s a personality fit: he’s a natural leader who inspires his teammates with his doggedness, and he relishes hounding opponents on-ball as they venture up-court (he would have thrived in Bob Huggins’ notorious press system).

For a moment, pretend you’re an NBA scout and check out the first four plays of this highlight package: You’ll see him confidently splash a game-winner. Next, he’ll jump a passing lane and throw it down on an opponent’s head. Then, he’ll attack the lane, take a bump, convert a tough layup, and go out of his way to let the defender know about it. Finally, you’ll see him harass a ball-handler a la Gary Payton (I or II), steal his cookies, then go full Russell Westbrook with a tomahawk, howl, and flex.

“It doesn’t matter who you is, what team you play for, what you got on — I’m coming to kill,” he said. “I’ll be the same guy on the court every game, locking up 94-feet, facilitating, scoring, talking, and being a leader.”

Gortman’s elite burst and glaring confidence enable him to maximize his 6’2, still-wiry frame (assuming he continues to build his body — watch out). His above-average handles combined with his explosion produce a devastating first step. He’s exceedingly deft — his quick lateral agility and effortless bounciness allow him to pull off wicked spin moves and fleet-footed hop steps through traffic. His athleticism and body control make acrobatic finishes look alarmingly smooth and easy.

Once he has his sights on the rim? Forget it. Frankly, it wouldn’t be foolish for Jazian to launch his own app producing NFTs of his midair detonations. You get the feeling Jazian would rather a defender contest his rim attack rather than give him a free pass.

“Jazian takes our guard play to the next level with his explosiveness, ability to score, pass, and defend,” proclaimed Kevin Ollie, OTE’s head of player development, who spent 13 years running point in the Association. “I get excited about players who always bring level-5 energy — in games, practice, the weight room, the film room, and the classroom. Jazian always brings it and that’s why so many have taken notice of him.”

So yes: the talent, athleticism, and intangibles are there. But Jazian is far from an NBA-ready product, which he’ll be the first to acknowledge. 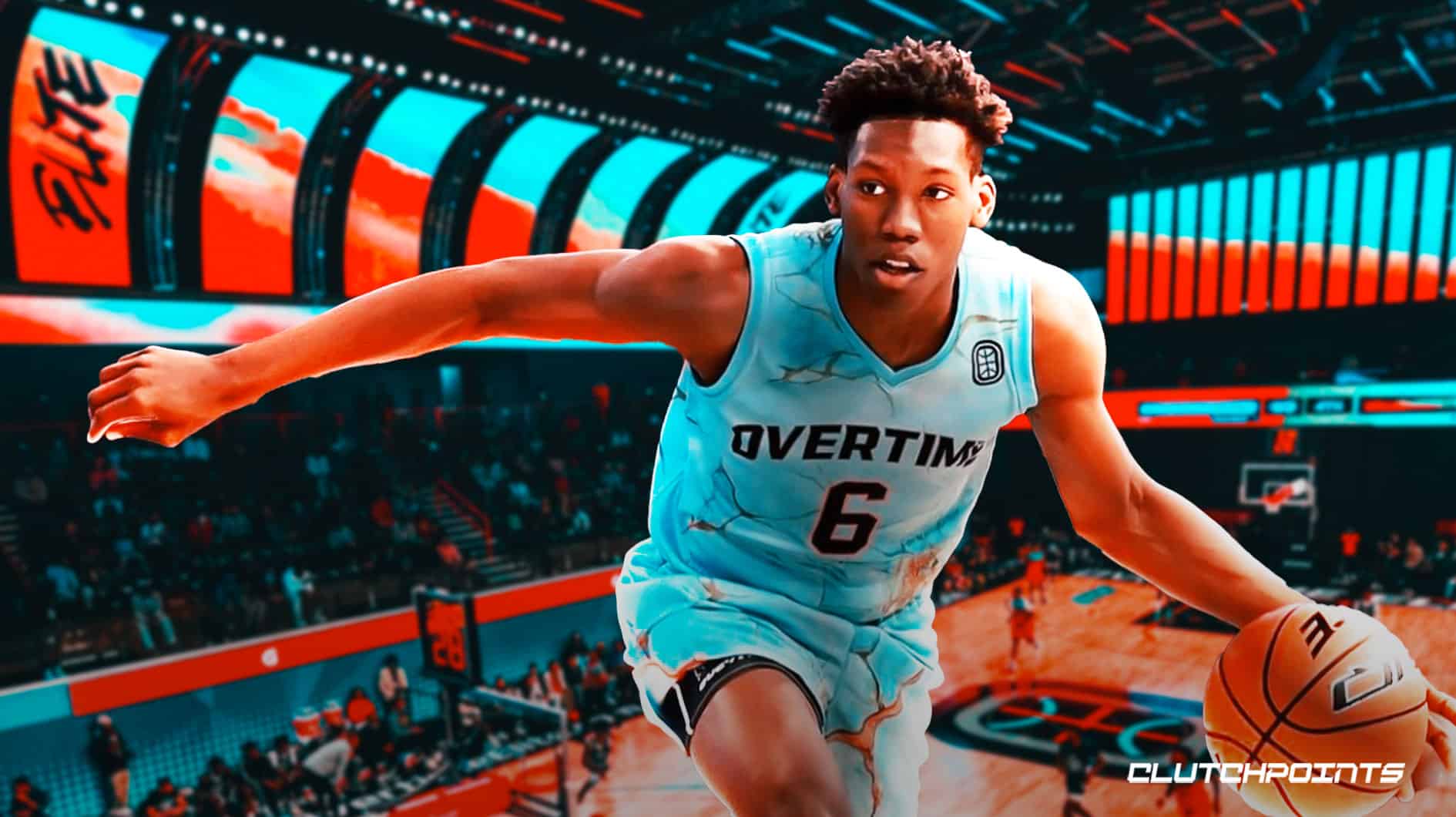 Like Westbrook, his shooting — .417/.273/.647 splits, 50.6 True Shooting Percentage — remains inconsistent, and his range can be greatly expanded. His playmaking can become more nuanced, as well. Gortman led OTE with 74 turnovers, though he was second in total assists (97).

In addition to “still working on being explosive,” Jazian said he wants to continue to improve his jumper and his sense of tempo. He isn’t satisfied with simply being a kinetic two-way player; he wants to perfect the subtleties of the sport.

Fortunately, he seems to be in the right place. Gortman credited the individual focus of OTE’s development approach. “The coaches, trainers, they pull you to the side and tell you things that you should work on. They ensure you’ve been working on whatever it is specifically that you need to work on every day. They create a plan.”

On his own time, Jazian is studying the right guys, too. Beyond LeBron James and Michael Jordan — his two favorite players — he’s been crunching tape of Chris Paul, the Master of Nuance (“his moves, his pace”), and likes to pick up moves from Jamal Crawford clips, among other wizards of the hardwood.

“I’ve been watching different guards around the league. I want the pace to be there. My biggest aim is my pace and my IQ,” he stated.

Jazian will play one more season in OTE and, ideally, declare for the 2023 NBA Draft. At the moment, NBA Draft Room projects him as a second-round pick, but that should only rise as he sharpens his skill set, builds up his body, and impresses throughout the pre-draft process (all safe assumptions). Only a fool would wager against somebody with his combination of competitiveness, tunnel-vision to improve, and pure, unadulterated hoops obsession.

“When I was younger, it was a dream for me to be in the NBA. But as I get older, it is now a goal. A goal that I wanna achieve,” he said.

But, Jazian’s ultimate ambitions are far bigger than basketball.

“I wanna go back home” Jazian Gortman said. “Build a 10-court gym in Cayce, West Columbia. I wanna have my own AAU team, go out and against the best. I just wanna make South Carolina a known state.”