Philadelphia fans are passionate. They also will let you know when you mess up, just ask Ben Simmons. Phillies third baseman Alec Bohm figured out what it truly means to play in the city on Monday following a difficult game in the field.

Bohm made three early-game errors which led to some boo’s around the stadium. But when he finally made a good throw to first base to record an out following the errors, the fans sarcastically applauded and cheered him on. It wouldn’t have been that big of a deal had the Phillies broadcast not picked up Bohm making derogatory comments about the fans and city. Bohm could be seen saying the following phrase while he was being mocked by the fans.

“I [expletive] hate this place.”

He made two errors right before this play. pic.twitter.com/YmsQpSsV2Q

Bohm was asked about the comments following the Phillies’ 5-4 victory over the Mets. He surprisingly owned up to saying what most people believed he said after reading his lips on camera. Most athletes would shy away from taking responsibility but Bohm provided a very mature response.

“Look, emotions got the best of me. I said it. Do I mean it? No. It’s a frustrating night for me, obviously. … These people, these fans, they just want to win. … I don’t mean that.”

Will Alec Bohm still get boo’d in his next at-bat and receive the Ben Simmons treatment? Possibly. But it looks like he is going to attempt to smooth things over with the fans. The former top prospect is looking for a breakout season in 2022 while the Phillies are aiming to make the postseason. 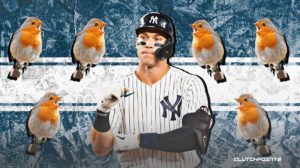