The Los Angeles Rams will be taking on the Arizona Cardinals on Monday. It’s an important NFC West showdown as the top two teams face off against each other. However, it’s a big game for Cooper Kupp as well, as he could join Michael Irvin and Odell Beckham Jr. in the record books.

According to Dov Kleiman, if Cooper Kupp can record at least 90 receiving yards on Monday, he will become the third player in NFL history to record that stat line in nine consecutive games. The Rams’ star would be joining elite company in Michael Irvin and Odell Beckham Jr.

Kupp has been an absolute monster this year. He immediately became Matthew Stafford’s favorite target, as Kupp has recorded 100 receptions, 1,366 receiving yards, and 11 touchdowns so far this season. He’s been dominating the game, giving the Rams consistency in the passing attack. 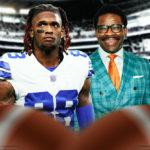 It’ll be interesting to see if Kupp can maintain his pace on Monday. The Cardinals’ defense has been the real deal this year and they won’t sleep on the Rams at all. LA needs Kupp to be at his best in this one, as the team hopes to earn a massive win on the NFL’s center stage.

Cooper Kupp will be heavily involved in the offensive game plan and considering he’s gone eight games reciting at least 90 yards, the chances are high that Kupp can make it a ninth. If he can manage that, he’ll have an opportunity to do it a 10th time in Week 15. We’ll see how it all plays out, but we should see Kupp ball out against Arizona.