The Los Angeles Rams were not among the more aggressive teams over this year’s NFL free agency period. However, they did complete multiple notable moves, which included signing Allen Robinson.

The Rams and Robinson came to terms on a three-year, $46.5 million deal. Even as Robinson was linked with several other teams for a free agent agreement, he opted to take his talents to the reigning Super Bowl winners.

The Rams’ call to bring in Robinson did not come as a surprise to both Matthew Stafford and Cooper Kupp.

According to Sports Illustrated’s Albert Breer, the Rams “involved” Stafford and Kupp in the decision to sign Robinson. After notable discussions on this matter, the call was made to haul in the veteran wide receiver.

As Breer also added, Robinson is slated to “fill the void” left by Odell Beckham Jr. and Robert Woods. Beckham remains a free agent, while the Rams shipped off Woods to the Tennessee Titans in March.

Overall, there have so far been glowing reviews from Rams players and coaches on Robinson. Among them, Stafford had a chance to work with him during the Rams’ OTAs schedule, and for one, he has been impressed with the wideout’s “ability to grasp” the team’s offensive system.

Robinson is coming off of a rollercoaster four-year run with the Chicago Bears, where he recorded 293 receptions and a 62.5 receiving yards per game average in 57 total regular season games played. 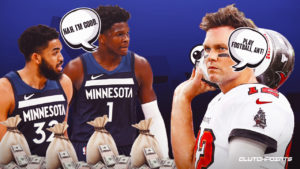