Rumor: Kareem Hunt’s future with Browns gets a crucial update When the Cleveland Browns selected former Cincinnati running back Jerome Ford in the fifth round of the 2022 NFL Draft, much attention turned to whether the team would consider parting ways with Kareem Hunt. However, this may not be the case after all.

As noted by Cleveland.com’s Mary Kay Cabot, Hunt is still “very much” in the Browns’ plans for the 2022 season. The team sees that the veteran running back is “a valuable member of the offense.”

The Browns may soon have to deal with a dilemma regarding the future of Hunt with the team. He has a mere one year remaining on his contract, as he has a $6.25 million cap hit for the 2022 campaign.

As it stands, the Browns and Hunt have not engaged in “substantive extension talks,” although the versatile running back is not in “jeopardy” of being a talent who the team plans to ship off before the start of the upcoming season.

After featuring in all 16 regular season games over the 2020 campaign, injuries wound up marring his 2021 season in Cleveland. For one, a calf injury suffered in October ended up placing him on injured reserve. Hunt finished the season with 560 yards from scrimmage and five total touchdowns over eight games played.

Nick Chubb is set to lead the Browns’ running back unit later this year. Overall, offensive coordinator Alex Van Pelt will have the likes of Hunt, Ford and D’Ernest Johnson to choose from to be Chubb’s primary backup at the position. 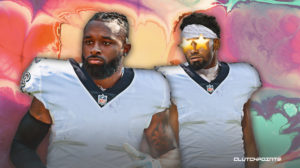