You know how they say that abuse trickles down? That sort of feels like what Stephen Curry and the Golden State Warriors were going for on Friday night.

The Warriors, fresh off getting manhandled by the Milwaukee Bucks in their last game, dealt the same punishment to their next opponent in the Chicago Bulls.

Golden State trailed by a gargantuan 39-point deficit against the Bucks after two quarters, then went ahead and took a 31-point lead into halftime against the Bulls. The 70-point halftime turnaround is the largest the NBA has ever seen in the shot clock era.

The Warriors led the Bulls by 31 at halftime tonight. Yesterday, Golden State trailed the Bucks by 39 at the break.

The 70-point halftime swing is the largest for any team in consecutive days in the shot-clock era (since 1954-55).

The Bulls played majority of the game without All-Star Zach LaVine, who went out with injury just a few minutes into the first quarter. Despite DeMar DeRozan and Nikola Vucevic trying to keep pace and a 20-point effort from Coby White off the bench in LaVine’s place, the Warriors just proved to be too much all at once for Chicago.

“We came out pretty determined,” Coach Steve Kerr said via ESPN. “Obviously, they were behind the 8-ball almost immediately when Zach (LaVine) got injured.”

The Warriors had six players in double-figures, including a huge 25-point outing for Jonathan Kuminga. Stephen Curry had a quiet evening, finishing with 19 points on 7-for-15 shooting.

After a brutal stretch of four losses in five games, hopefully this gets Golden State out of their short funk. 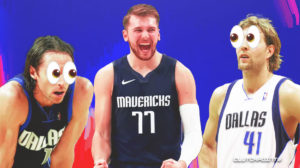