For someone who grew up adoring the brand of basketball that was played in the NBA during the 1990s, Tim Hardaway Sr. most famously of the Golden State Warriors and Miami Heat, stood out in particular, passing the drip and vibe check with flying colors. Hardaway owns one of the nastiest crossovers in NBA history, and he surely inspired the young guards of his time to incorporate that deadly move into their arsenal. One such player is Stephen Curry.

Curry, the Warriors’ undisputed greatest of all time, grew up watching the NBA in the 1990s, being taken courtside and into the locker room by his father Dell Curry, who most notably played for the Charlotte Hornets. The Curry family still has roots in Charlotte, and Curry even went as far as naming the Hornets as the only team he’d play for other than the Warriors if push came to shove.

Simply put, Stephen Curry’s experience watching the NBA in the 1990s played a crucial part in his formative years as a basketball player. And Curry surely regards Tim Hardaway as one of his most foremost inspirations. In an interview with Andscape.com, Curry revealed the true impact Hardaway’s had on him.

“There are a lot of players in the league that I grew up watching that jumped off the screen based on their style. I didn’t really care what their stats were. It was more so just the impact of watching them play and building a love for basketball,” Curry said. “[Hardaway] is up there on that list of guys.”

Tim Hardaway was eligible to be inducted in the Hall of Fame as early as 2007, but his candidacy was marred with off-court issues that delayed his enshrinement. However, Stephen Curry recognizes Hardaway’s true value as a player, and he will surely be thankful that Hardaway has made amends to those he had offended.

“The way he played had a lasting impact and was Hall of Fame-worthy. I always knew it was just a matter of time before he made it to the Hall of Fame,” Curry added.

Tim Hardaway will finally be inducted into the Naismith Memorial Basketball Hall of Fame on September 11, where he will be presented by fellow Hall-of-Famers Isiah Thomas, Mitch Richmond and Chris Mullin (Hardaway’s Warriors Run TMC running mates), Yolanda Griffith, and Nate “Tiny” Archibald. Hardaway’s long and grueling wait will finally pay off. 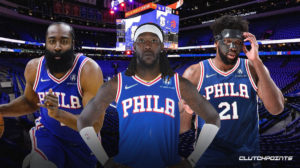