With families quarantining around the nation due to the coronavirus pandemic, Los Angeles Lakers superstar LeBron James took to Instagram on Thursday night for his first live session with fans and followers. As you might expect, several notable names joined the stream, including The Big Diesel himself, Shaquille O’Neal.

Near the 3:45 mark of the video, Shaq chimed in with a bit of friendly heckling, poking fun at the size of LeBron’s head:

As he and his family members played a game of cards, James looked down at his phone and noticed O’Neal’s comment. The Lakers star might have been confused by Shaq’s typo: 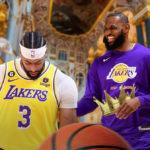 James and the Lakers were on a roll prior to the NBA’s decision to suspend the regular season due to ongoing concerns surrounding the coronavirus pandemic. In fact, The Lake Show (49-14 overall and 1st in the West) clinched its first playoff berth since 2013 with a recent win over Giannis Antetokounmpo and the Milwaukee Bucks.

Though he’s playing in his 17th season, LeBron James is showing little to no signs of regression. For the first time in his career, the three-time champion has a shot at leading the entire league in assists. He has played in 60 games for the Lakers this season, racking up averages of 25.7 points on 49.8 percent shooting from the field (34.9 percent from beyond the arc), a career-high 10.6 assists, 7.9 rebounds and 1.2 steals in 34.9 minutes per outing.