The story of the man who was better than LeBron James in high school: Lenny Cooke

This is the story behind the high school player that was once ranked ahead of LeBron James.

Back in the summer of 2001, we had a bubbling pool of future NBA talent all waiting for their chance of being drafted into the biggest and best basketball league in the world. Many of the players from that era have gone on to be household names and stars of the game. However, back in 2001, the talk was all about one player, and a player you probably haven’t heard of. The talk surrounded someone who was never drafted into the NBA, and someone who never played a game in the NBA, but at that time the experts genuinely thought he would be an all-time great. Ahead of Carmelo Anthony, and also ahead of LeBron James was a man called Lenny Cooke, a player who many thought would scale the top end of the NBA, but a player who never made it. 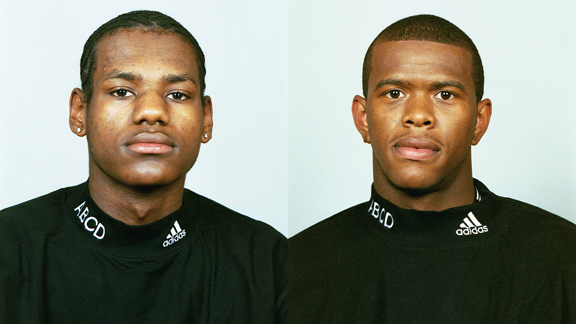 It seems bizarre to think that as a high school player, LeBron wasn’t streets ahead of the competition like he is now, but that was exactly the case. During the summer of 2001, Lenny Cooke was top of the rankings, with both James and Anthony in behind him and looking like being lower ranked NBA draft picks at that time.

The thought process at the time was that Cooke was going to become a legitimate NBA star, the path looked clear for him to join the best in the game, play in the NBA and work his way to the top. The numbers he put up in high school all backed up that thought process, he was showing the right signs and alerting all the scouts to his progress. During his junior year at high school, the stat line produced by Cooke was exceptional for such a young player and it was back then that they hype started. There was no fluke about his rise to the number one ranking spot, it was all based on the numbers he was putting up at high school. 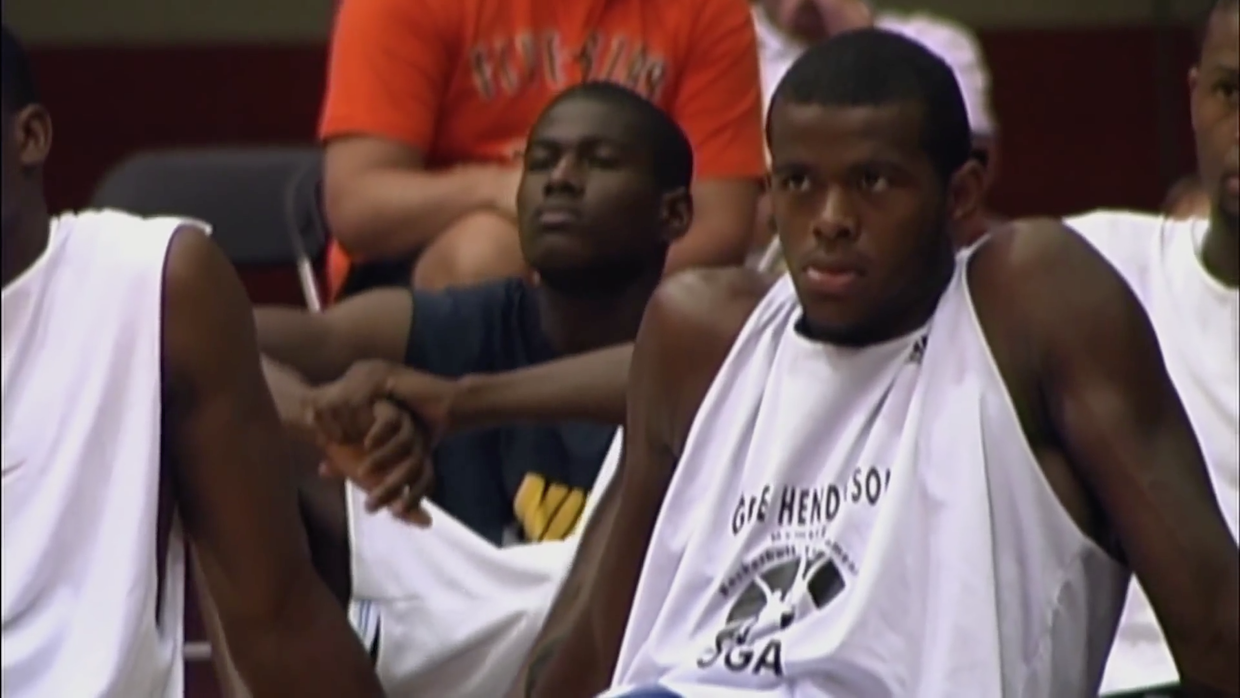 During his junior year, Cooke averaged an impressive 25 points per game, adding an average of 10 rebounds, two steals and two blocks. Those were enough to get the scouts visiting to see his play and the year after in his senior year, he impressed even more despite only playing in the first eight games. He averaged 31.5 points in those eight games, got off to a monster start only to be forced to stop playing when he turned 19 due to the regulations in New Jersey. Despite having played just eight games, Cooke had a break out season, the hype looked to be legitimate and he was ranked the number one prospect of the future, ahead of the two current NBA stars we have already mentioned, LeBron James and Carmelo Anthony.

Right at this point, the shares in Cooke were the highest they had ever been, but unfortunately for him they would only go one way from here and that was down. This moment in his career saw him at the top of his game, ranked the best among other prospects of his age, and sitting at the top of the tree. Despite all that, things were going to take a turn for the worse, and he was going to see his career fail to get going, which seemed very unlikely at the time.

Back in 2001, those in the know about Cooke and James made sure they visited the ABCD Camp matchup between the pair. Cooke was the big name in New York basketball back then, he was also the defending MVP at camp and many expected him to take that title home with him for a second year. However, a lesser known player by the name of LeBron James had other ideas. It was right here at this point that James became the number one prospect, knocking Cooke off the top spot in the process. This was the first of a number of things that went wrong for Cooke, eventually leaving him with no career in the game.

After exhausting his eligibility in high school, Cooke had to make a huge decision about his future, he had one year left to graduate. At this point he chose to move schools and finish his final year at Mott Adult High School, something which allowed him to continue playing regular basketball. Although he was not eligible to play in school games, he could play in tournaments and pickup games, allowing him to hone his skills on the court in competitive action. 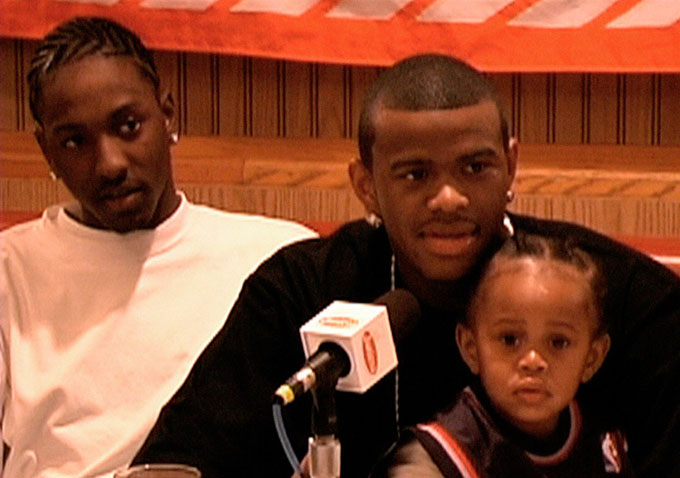 In 2002, Cooke looked to be on the way back when he scored 21 points in the EA Sports Roundball Classic, a game which put the East against the West, held at the United Center in Chicago. His performance was enough to rank him 4thout of the prospects at his age group, some way below what he was but at least the potential to make the NBA was still a possibility for Cooke.

A few months after being ranked as the number four prospect, Cooke hit another crossroads in his career, and the decision he made here was going to be one he would surely regret for a very long time. Cooke had many options ahead of him to continue playing basketball at University level. Of the many interested in him, he seemed particularly drawn to St John’s, which was in the New York area, allowing him to play in very familiar surroundings.

At this point, many agents began talking to Cooke and they distracted him from his options. Despite many Universities being interested in Cooke, he was told about NBA interest by the many agents around him, and those agents eventually forced him to make a huge mistake. Instead of playing for a further year before going to the NBA, he made himself available for the NBA draft a year early. The pressure was on Cooke, and he was told by many agents that numerous NBA clubs would take him in the draft if he was available, he believed these and began to chase his dream of playing in the big league.

Unfortunately for Cooke, this was the wrong decision to make and when he went through the draft, no team picked him up, leaving him as a free agent and available to sign with any team. This was a huge blow for his stock, and left him wondering what he should do next, he was sold the NBA dream, and was left with nothing but disappointment.

The minor leagues were where Cooke had to play his basketball at this stage, starting off in the Rucker Park Summer League, before getting a shot to play in the NBDL. Those were small stepping stones towards the USBL, which Cooke joined in May 2003 to play with the Brooklyn Kings. He seemed happy at this point, scoring and average of 28.8 points and over nine rebounds per game during his 15 game stint. Those numbers alerted the Boston Celtics, maybe his NBA dream would become a reality after all?

Cooke was invited to join the Celtics summer league team, but unfortunately for him this would be as close as he would get to the NBA. He played many games for the Celtics summer team, but one game he didn’t play was when they faced the Cleveland Cavaliers, a game which would have given us our last ever Cooke vs James matchup. LeBron had just been drafted in 2003, and was on the Cavs summer league team, but unfortunately Cooke was not part of the game that day.

The Rucker Park Summer League, the PBA in the Philippines and the CBA in the US were the final stops in the career of Lenny Cooke and it was the CBA where we saw him play for the final time. During his time in the PBA, Cooke tore his Achilles tendon, and then he went on to tear the other one during his final season in the CBA. The two injuries together were severe enough for Cooke to call time on his career, ending an emotional rollercoaster for him.

The one-time highly rated future NBA star failed to make the league, after an electric start as a youngster. Bad luck, bad advice and a couple of bad decisions have led to the path that Cooke eventually took and looking back it was a great shame to see his career work out the way it did. Clearly a huge talent as a child, he could never live up to the billing as he grew older, with such pressure on his shoulders from a young age.

While the names LeBron James and Carmelo Anthony remain household names and will do for a long time, don’t forget Lenny Cooke, who was once rated better than those two. Cooke stole the show as a youngster, but failed to translate that into an NBA career for himself. Who knows what would have happened had he managed to keep on track during his youth and being allowed to reach his full potential.