The Los Angeles Lakers have reportedly signed Brooklyn Nets coach Jordan Ott as part of Darvin Ham’s coaching staff. Golden State Warriors star Draymond Green caught wind of the news and he was quick to give the deal his seal of approval.

Green had nothing but praise for Ott, who happens to be the former coach of Draymond’s ex-Warriors teammate Kevin Durant:

As Woj’s report states, Ott is expected to play a significant role in the Lakers coaching staff under Darvin Ham.

Ott is no household name, but he has experience under his belt. He spent three seasons in Brooklyn before deciding to take his talents to Hollywood to help coach LeBron James and Co. Before his Nets stint, Ott was a video coordinator for the Atlanta Hawks for several years. He’s obviously worked his way up the ladder and he’s now taking a significant step with the Lakers.

Speaking of assistant coaches, Green and the Warriors nearly lost theirs a couple of days ago. Reports suggest that Kenny Atkinson had already agreed to be the head coach of the Charlotte Hornets only to shockingly change his mind at the last second. Golden State was more than happy to take him back. 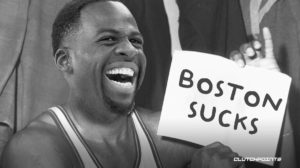