The MLB trade deadline is now in the rearview mirror and the New York Yankees improved their roster as we all expected them to. Slugger Aaron Judge is on an absolute tear right now and there doesn’t seem to be an end in sight. With Judge hot and the Yankees getting better, there is a lot to look forward to in the Empire State.

For this edition of ClutchPoints MLB prop bet of the week, we stay in the state of New York as the Yankees are the talk of the league. Aaron Judge is on a pace right now to finish with over 60 home runs. Judge currently leads the league with 43 home runs and he doesn’t seem to be slowing down at all.

Here are the MLB odds, courtesy of FanDuel.

The season still has two months left and that is over 60 games for Judge to hit 19 home runs. If the over were to hit, then that is the number Judge needs. That doesn’t seem too bad and the odds are in your favor. Judge has 43 homers on the year with 93 RBIs. Playing in Yankees stadium is very hitter-friendly and that should give him the advantage needed to get this done.

The right-handed slugger has five home runs in his last seven games and 25 at home this year. If he continues to stay on this pace then he should hit the over with ease. They host the Seattle Mariners who are struggling after that huge win streak they had before the All-Star break. With the way the Yankees are playing, especially Judge, I expect him to continue his hot run of success.

Judge currently leads the league in homers and RBIs and his 1.062 OPS is second in baseball behind Yordan Alvarez. He’s on an MVP run right now and he should stay on track to end the year on fire.

The Yankees are about to go on a huge road trip where they face the St. Louis Cardinals, Mariners once again, and the Boston Red Sox. All of these squads have elite pitching. Then, once they come home they face the Tampa Bay Rays, New York Mets, and Toronto Blue Jays. Basically, the next six series they play will have some good pitching. Judge is proving he is one of the better hitters in the league if not the best this season. Although it’s not easy hitting dingers off the best in the game.

The New York Yankees are winning a ton of games and are getting a ton of production from others as well. Judge could slow down a bit not because of his talent, but because the pressure won’t be on him to continue to produce. Yes, he has been healthy all year and that is the best news, but they just acquired a ton of talent at the deadline and two outfielders to help with the defensive efforts. Andrew Benintendi and Harrison Bader will take some of the load off of Judge.

This should be an easy decision. With the odds in your favor putting something down on Aaron Judge to hit over 61.5 home runs is a great pick. Take the over and watch Judge continue to smash his way into history. 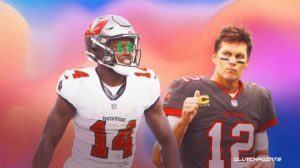