Dwayne ‘The Rock’ Johnson is indeed a person who’s bigger than life itself. After conquering Sports Entertainment and Hollywood, it seems the 48-year old star is about to dominate the card market soon. Case in point, a PSA 10 1994 Miami Bumble Bee rookie card of Johnson owned by one of the biggest names in the music industry,  Timbaland. 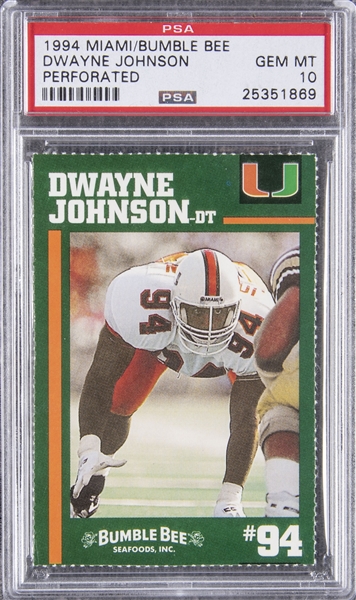 In an auction currently being held by Goldin Auctions, the said card is now commanding a $66,000 price tag. As it stands, there are still six more days until the auction ends, which means there’s enough time for the card to break the $100,000 mark. If that happens, this will be the most expensive card that has The Rock in it.

Cardporn, meanwhile, posted on Facebook several details about The Rock and his graded card and Timbaland’s ownership of it. The post explained that the card was purchased from Bleecker Trading sometime in February. Darren Rovell also reported that the price sold reached $45,100.

The Rock played college football for the Miami Hurricanes and even appeared in the Canes’ national championship team in 1991. However, his football career was mostly a forgettable one, as he started just once in his four years of stay with Miami.

Cardporn then proceeded to criticize Timbaland’s decision to sell it in such a short time, deeming the move as a classic case of market manipulation. The card page then issued a warning, saying that the item’s price will crash down and the person owning it will lose money. In any case, this card merits more attention in the coming days to determine if there is any wrongdoing involved with one of the most-high profile cards in the market right now.