The Seattle Kraken built their team through the NHL Expansion Draft a few weeks ago, but some of their decisions left fans with questions.

While the team passed on some big-name players like Carey Price in order to maintain cap flexibility, other decisions seemed to lack any reasoning. On multiple occasions, the Kraken seemingly passed on the opportunity to get assets back and walked away with nothing from certain teams.

While the team made some questionable decisions, such as taking Morgan Geekie from the Carolina Hurricanes or Dennis Cholowski from the Detroit Red Wings over other available players, at least they selected a young player who could factor into long-term plans.

Below, however, we take a look at five picks the Kraken clearly got wrong.

The Kraken had some decent options from the Chicago Blackhawks. The team’s list of available players included forward Adam Gaudette, as well as defensemen Nikita Zadorov.

However, Seattle opted to select forward John Quenneville instead. A former first-round pick, Quenneville has yet to earn a full-time NHL role, at 25 years old. The Kraken then proceeded not to sign him and as a result, Quenneville is currently a free agent.

While Zadorov was in need of a new contract and the Kraken likely didn’t want to pay the price, the defenseman was later flipped for a third-round pick, a move which could have been made by Seattle. Gaudette was another solid option, and later re-signed with Chicago for under $1 million. Instead, the Kraken walked away with no assets from the Blackhawks.

Max Domi seemed like the clear choice from the Blue Jackets. While the forward was coming off a down year, he was just two years removed from scoring 28 goals and 72 points with the Montreal Canadiens.

The Kraken decided to go with defenseman Gavin Bayreuther instead, who was about to become an unrestricted free agent. The Kraken then chose not to sign him and Bayreuther went right back to the Blue Jackets on a two-year deal.

Even if the Kraken weren’t overly interested in Domi, they almost certainly could have selected him and then flipped him for assets. Considering he had just one year remaining on his deal, the Kraken would’ve had the opportunity to retain some salary if needed, without any long-term implications.

As was the case with the Blackhawks, Seattle wound up with absolutely nothing from the Blue Jackets.

This was another one of the decisions that left everyone scratching their heads. MacDermid is 27 years old and still wasn’t able to earn a full-time role on a relatively thin Kings’ blue line. He clearly wasn’t going to be a long-term fit with the Kraken and the team passed on better players to select him. As other available options, the Kraken could’ve selected Andreas Athanasiou, Carl Grundstrom, or the ideal choice, Kale Clague.

John Hoven of Mayor’s Manor had reported there was a ‘huge respect’ between Kraken general manager Ron Francis and his former teammate Paul MacDermid, Kurtis’ father.

If that was the case though, then why was MacDermid flipped to the Colorado Avalanche for a fourth-round pick shortly after the Expansion Draft? At that point, the Kraken should’ve gone with Clague instead, who could’ve been a quality young defenseman for the team. None of it made sense. 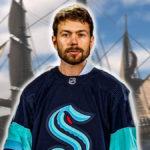 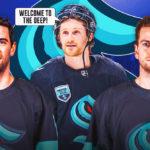 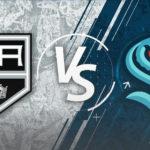 Looking at Seattle’s roster, arguably the one area they’re noticeably weak is with their top-six forwards. This could’ve been at least partially helped by the Flyers taking either James van Riemsdyk or Jakub Voracek.

While neither player’s cap hit was overly appealing, both forwards were on pace for around 65 points per 82 games last season. Either would’ve been a major addition to the top-six group. Additionally, neither had a huge amount of term remaining on their contract. Van Riemsdyk had two years left, while Voracek had three years remaining, which made either a fairly reasonable option.

With this pick, you can see the Kraken clearly just wanted to steer clear of taking a big contract. While there’s logic to passing on the two forwards, Seattle now has quite a bit of cap space left and a weak top-six group, which could’ve been partially solved by taking either van Riemsdyk or Voracek.

On the surface, selecting goaltender Vitek Vanecek made sense. He’s still just 25 years old and was coming off a pretty decent rookie season with the Washington Capitals, where he took on the majority of the workload in net. Even if Seattle intended to target Philipp Grubauer in free agency, having Vanecek as a trade chip made some sense.

He wasn’t the ideal selection, however, as the Kraken should have taken defenseman Brenden Dillon.

While the Kraken were able to flip Vanecek back to the Capitals for a second-round pick, we watched Brenden Dillon fetch two second-round picks from the Winnipeg Jets. Essentially, if Seattle had selected Dillon over Vanecek, they could’ve gotten back an extra second-round pick in a different trade. It’s another scenario where the team missed out on the opportunity to add more free assets.