Rockets have the numbers to back up ‘Clutch City’ tag

The moniker “Clutch City” was not randomly endowed to the Houston Rockets for no reason. A recent statistical comparison, courtesy of basketball-reference.com, proves just how clutch the Rockets are.

We turn to Wikipedia for a technical definition of the term “clutch,” which is an expression used not only in basketball, but in the entire realm of sports as well.

“Clutch performance in sports is the phenomenon of athletes under pressure, usually in the last minutes of a game, to summon strength, concentration and whatever else necessary to succeed, to perform well, and perhaps change the outcome of the game. It occurs in basketball, hockey, football, other sports and esports.”

That does sound a lot like the Rockets, and here is some hard proof to back up this claim, via casino.ca.

The Rockets top the first column of the table, which pretty much means that they are the best in the league when it comes close games. By shooting 66.5% within the last two minutes of the final quarter of one-possession ballgames, the Rockets are first by quite a distance. Second-placed Milwaukee Bucks, who likely have superstar Giannis Antetokounmpo to thank for this, are a far second with 53.4%

Skipping to the third column, we see that the Rockets are again at the pinnacle. Only three teams in the entire league shoot above 50% when down by three points or less in the dying minutes/seconds, and the Rockets have an impressive 52.4% score to show for.

Finally, the second column is where the Rockets fall down back to earth. In close games wherein they lead by three points or less, the team only shoots 37.1% which ranks 18th in the entire league. However, it is worth noting that the franchise won a league-best 65 times in the regular season last year. It would then be safe to assume that despite shooting poorly during in these situations, the Rockets still have a knack for winning these games.

All of these statistics certainly prove that Houston is truly THE “Clutch City.” Needless to say, Houston appears to thrive under pressure and more often than not, take the victory in games  that are decided by close margins. 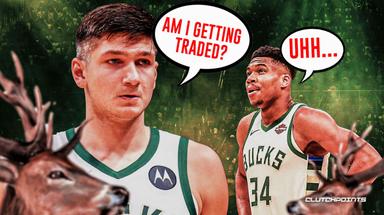