The Celtics Are Rewriting Basketball And Narratives

For decades, the Boston Celtics’ glory was immortalized by the words of iconic scribes like Jackie MacMullen and Bob Ryan.

Today, there are so many more voices covering the team, not only recording what happened but projecting what will. Throughout the playoffs, these Celtics have remained a defensive rotation ahead of opposing offenses and several steps ahead of our narratives.

The second round was supposed to tell the tale of the Philadelphia 76ers’ ascension. When Boston outlasted the talented young Sixers, praise for precocious star Jayson Tatum oozed from every corner.

That was supposed to change against LeBron James and the Cleveland Cavaliers. The Celtics were a fun story and all, but the Eastern Conference Finals and James were supposed to be a different animal.

Writers and analysts spent the season pouring over net ratings, lineup data, and points per possession stats to explain and project big picture results. The 82-game sample size told us the Raptors were by far the best team in the East and the Cavaliers, while potent offensively, was one of the worst defensive teams LeBron has been on in years.

After a rough first round against the Indiana Pacers, LeBron James’ Cavaliers awakened in time for the playoffs to chug a bottle of 80-year-old scotch, burn the binder full of regular season Analytics™ charts, and once again showed the world the playoffs are more about matchups than regular season results.

At the top of its game, Cleveland forces teams to pick their poison. Do you let LeBron James exploit defenders in single coverage for any shot he wants? Or do you send help and run the risk of him picking your defense apart with laser beam passes while Cavaliers’ shooters bomb you out of the gym?

The Raptors lacked the discipline, personnel, and focus to erase either option and paid the ultimate price. LeBron controlled the tempo and played to his rhythm while Toronto fell apart on both ends, losing in a sweep.

With all the narratives everyone spent all season crafting thrown out the window, everyone settled back into familiar themes.

LeBron James had his swagger back, Kevin Love once again played like an All-Star, and the trio of J.R. Smith, Kyle Korver, and Jeff Green was raining threes from everywhere. By most accounts, the Celtics’ storybook run through the playoffs was all but over, set to be fed into the wood chipper that was the Cavaliers’ offense.

No one, however, told the Celtics their time had expired.

From the opening tip until the final horn, the Celtics were hellbent on turning every playoff narrative on its collective head.

Jaylen Brown (23 points, eight rebounds) put his head down and scored at the rim within seconds and didn’t stop for the rest of the night.

Didn't realize that Jaylen Brown got the first bucket of the game today w/ a Smitty. @steve21smithpic.twitter.com/T8QLTKJyTn

Al Horford shook off the specter of LeBrons’ Past and turned up the aggression, making his first six shots and thoroughly outplaying his counterparts, Kevin Love and Tristan Thompson.

After his incendiary series against the Sixers, the Cavs seemed keyed into Jayson Tatum (16 points, six rebounds, two steals), but the youngster picked his spots, delivering momentum shifting shots when needed.

The Cavaliers trail the Celtics by 26 points at the half. It's the biggest halftime deficit a LeBron James-led team has ever faced in the playoffs.

We joke about LeBron James being a cyborg, but it was Brad Stevens and his Celtics who were part men, part machines in Game 1.

Stevens generated the code for defending these Cavaliers and the Celtics executed the program with atomic precision. The cushy driving lanes LeBron James cruised against the Raptors evaporated against the stout defense of Marcus Morris, backed by the electron-quick Celtics rotations.

Passing windows LeBron (15 points, seven rebounds, nine assists, seven turnovers) has come to depend on were padlocked shut as the Celtics sniffed out backdoor cuts and anticipated scripted ball reversals.

Switching smaller defenders on James usually means trouble for opponents, but the Celtics were ready for him, rewriting the rules of defense on the fly by seamlessly executing “scram” switches mid-play to stymy James attacks and gum up the Cleveland offense.

Al Horford's command of the defensive scheme on this play epitomized how Boston dominated early. With TT on the floor, Celtics went into a switching scheme where Cleveland wanted to get Rozier on LeBron. Horford would sag off TT waiting to switch Rozier off & smother Lebron. pic.twitter.com/1ztLL9kVgA

And even after the Cavaliers clawed back to within 14 at the end of the third quarter on a Jeff Green desperation fadeaway, the Celtics never panicked. Immediately to start the fourth quarter, Morris dunked in his own miss, Marcus Smart hit a three, and Tatum euro-stepped his way to a layup. The lead ballooned back to 21 and the route was back on.

LeBron James came into the day averaging 34.2 points while shooting 55 percent from the floor in these playoffs. Kevin Love surged back to form against Toronto, tossing up 75 points and 38.5 percent three-point shooting in the last three games of the second round.

The Celtics bottled both by mixing rock solid individual defense, doubles on the catch, and jump switches, limiting them to a combined 31 points on just 10-29 shooting.

Against the Raptors, Kyle Korver, JR Smith, and Jeff Green shook free to provide ample auxiliary firepower in support of LeBron and Love, combining for just short of 40 points per game and 31 made threes in the sweep. (JR Smith shot 10-for-13, 77 percent against the Raptors). 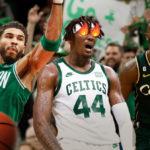 Facing the Celtics furiously buzzing defense, Korver-Smith-Green managed a mere 15 points and a solitary make from downtown. Brown, Rozier, and Smart dug in for full possessions, refusing to give the Cavs the same room to breathe that they frolicked in versus the Raptors.

The final score was 108-83, and if he could, Danny Ainge would frame and mount this game as a testament to his vision when constructing this team of long, rangy athletes and dogged defenders.

The series is far from over. Boston was the two seed and Cleveland was the 29th-ranked defense during the regular season, but toss all of those out of the window. The playoffs are all about matchups, and for the past seven years and counting, LeBron James has proven to be an unsolvable puzzle for Eastern conference foes.

Brad Stevens has pushed all of the right buttons so far in these playoffs and it’s a solid bet he has another wrinkle or two up his sleeve to counter the inevitable aggressive, motivated LeBron sure to make an appearance in game two.

And while credit is due to the Celtics’ defense, it’s folly to assume a Cavs team that came into the series burying over 10 threes a night will hit only four again. As brilliant as Horford has been, it’s probably not a good idea to expect him to open a game by hitting six of his first shots, or the trio of Horford-Morris-Brown to make 8-for-13 from the great beyond.

But for one night, the Celtics once again defied the odds (and the pundits calling for a firm LeBron beatdown of the shorthanded Celts) by rendering LeBron James toothless.

LeBron James was a -32 against the Celtics in Game 1 today, tied for his lowest +/- in a playoff game in his career. https://t.co/MdfS6fbkuapic.twitter.com/KiBopqyEP6

Fifteen years in, LeBron James is as lethal a player as he’s ever been But while James is at the height of his mental and physical mastery, this is probably the most vulnerable the team around him has been in his run of Finals appearances. Boston has the depth, athleticism, and smarts to put the Cavaliers under pressure.

How the Cavs respond will set the tone for the remainder of the series, but you can bet the Celtics won’t shy away from the challenge. They’re already “not supposed to be here,” so what do they have to lose?

History is for the papers. The Celtics will write their own damn story on the court.