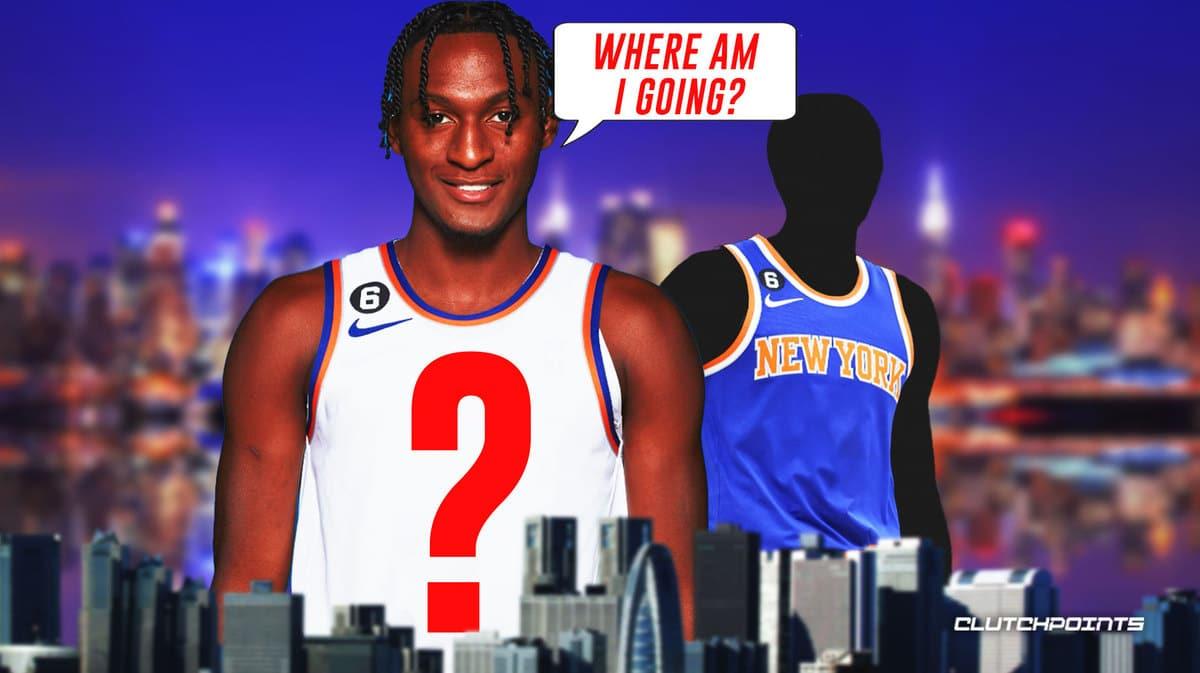 The New York Knicks have had a roller-coaster ride of a season. They have pretty much taken one step forward and two steps back this season. The Knicks, in fact, have yet to develop any form of consistency and have failed to establish themselves as an above-average club on either end of the floor. At present, they have a 9-9 record, which is good enough for ninth place in the Eastern Conference. Here we will look at the most realistic trade target for the Knicks after the first month of the 2022-23 season.

Of course, it’s too early to give up on this season, and the Knicks have shown little interest in pulling this squad apart. If anything, New York appears to be more of a buyer than a seller this trade season.

Having said that, the Knicks are reportedly seeking to put several guys on the trading block. This includes guys like Evan Fournier, Derrick Rose, and Miles McBride. One guy we feel who will most likely be part of a deal, however, is 23-year-old Immanuel Quickley.

Now let’s look at the most realistic trade target for the Knicks after the first month of this season.

The Knicks have shown a willingness to discuss Derrick Rose and Immanuel Quickley in trade talks, per @ShamsCharaniapic.twitter.com/1bvLH84LNb

Despite a dismal start to the season, shooting a career-low 35.6 percent from the field and 27 percent from downtown, Immanuel Quickley has been mentioned in trade discussions.

According to Fred Katz of The Athletic, the Knicks have made Quickley available but are determined to get a high draft selection for the third-year guard. Keep in mind that Quickley was a 2020 first-round pick. He has shown flashes of potential but has failed to grow into a consistently productive player, particularly on the offensive end.

Over his first three seasons, the Maryland native has averaged 11.1 points, 2.9 rebounds, 2.9 assists, and 1.7 triples per game. He has shot just 39.2 percent from the field, including 36.0 percent from beyond the arc. He’s a reliable free-throw shooter, though, connecting on 88.2 percent from the stripe.

This season, however, his numbers have noticeably dipped. He is shooting just under 38.0 percent from the floor and just over 30.0 percent from three-point land. Of course, he’s still an important part of coach Tom Thibodeau’s rotation thanks to his defense. Quickley has also become a surprisingly good rebounder for a 6’3″ guard. He’s grabbing 4.6 boards per game this season. Thibodeau, in fact, recently had good things to say about Quickley.

“I think the hardest breaks to stop are the ones that, when you study transition, where guards get the long rebounds and they just go with it,” Thibodeau told Katz. “You’re going to automatically have an advantage. Those breaks, I love when he busts out.”

The reality is that since Quickely’s first season, his offensive effectiveness and efficiency have fallen. On the flip side, however, he’s dramatically improved as a defender. He’s one of the squad’s finest help defenders and excels at guarding ball handlers. He sets the tempo and dives for those loose balls. Right now, we can view Quickley as someone who has gone from a one-dimensional instant-offense scorer to a player who does the dirty work. What value will that kind of player have in today’s NBA landscape? What will he fetch before the trade deadline? We’ll see.

As for the Knicks, it’s all about the big picture. Keep in mind that the Knicks have waited long enough in their pursuit of a star that the young players they hoped would form the core of a big-time trade are about to lose what makes them most appealing: their low cost.

According to Spotrac, Quickley is earning $2.3 million this season and is eligible for a rookie extension in the summer. As things stand, he will earn a little under $4.2 million in 2023-24. That’s still a low enough salary package for someone with Quickley’s skill set and potential.

Remember as well that the Knicks are stocking up on picks. It sure looks like they’re allocating more value to draft assets than their actual fringe players like Quickley. This means that selling Quickley for a pick surely works in NYK’s favor. League sources have confirmed as much. According to them, the Knicks are looking for a future first-round pick in exchange for Quickley, who, again, is contract-eligible this summer.

Of course, it’s uncertain whether any team will be prepared to part with a first-round pick for Quickley. Recall that his lack of offensive advancement could be an issue. Is there any team out there willing to take on that much risk? Is there any club willing to possibly pay him more in the years to come? Right now, one potential partner could be the Oklahoma City Thunder, who could use someone like Quickley off the bench to back up either Shai Gilgeous-Alexander or Josh Giddey.

Take note that first-round picks are extremely important in today’s NBA, particularly in the upcoming 2023 draft, which is expected to be stacked. As such, who knows if other clubs will even offer the Knicks a first in return for Quickley? If the Knicks are serious about getting picks, adding a second or even third player to a Quickley-centric deal might do the trick.

Of course, securing draft assets also does not necessarily mean the Knicks will use them in the actual draft. They can package these assets in another future trade for a bona fide and proven star. They failed to do that in the Donovan Mitchell sweepstakes, but we feel they will try again. Of course, they’ll have another go at a star in the future. Stockpiling draft picks would surely make them a big player in that kind of context.

We definitely expect the Knicks to remain aggressive in the trade market before the February trade deadline, whether this actually involves Quickley or not.