After Houston Rockets star point guard Chris Paul was seemingly snubbed of an invitation to the 2018 NBA All-Star Game in Los Angeles, many have pondered how exactly he felt about it. According to a tweet on Saturday afternoon during All-Star media day from Jonathan Feigen of the Houston Chronicle, Paul’s teammate in superstar guard James Harden is one of the people who is extremely perplexed by the whole situation.

Despite the fact that the Rockets have the best record in the league heading into the All-Star break at 44-13, Houston only has one All-Star in Harden to show for it. Since Paul hasn’t been vocal about his snub from this weekend’s festivities in Los Angeles, Harden was certainly willing to stand up for his teammate.

“Obviously, everybody knows Chris Paul is with the Rockets. The Rockets have the No. 1 (record). How does that happen? It’s frustrating. I know he’s frustrated. He never brings it up. That’s why I said what I said,” Harden said on Saturday.

Harden, who is currently the NBA’s leading scorer by a comfortable margin at a whopping 31.3 points per game, knows that Paul should be participating in the All-Star Game with him this season.

“He’s never going to bring it up. I’ll defend for him. He should be here with me in L.A. as an All-Star,” Harden said of Paul being snubbed this year. 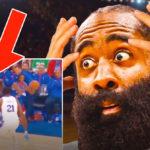 Paul, who is in his first season with the Rockets after being traded over the offseason from the L.A. Clippers, is currently averaging 19.2 points on 47.0 percent shooting from the field, 8.3 assists, 5.7 rebounds and 1.8 steals per game this season in 39 contests played.