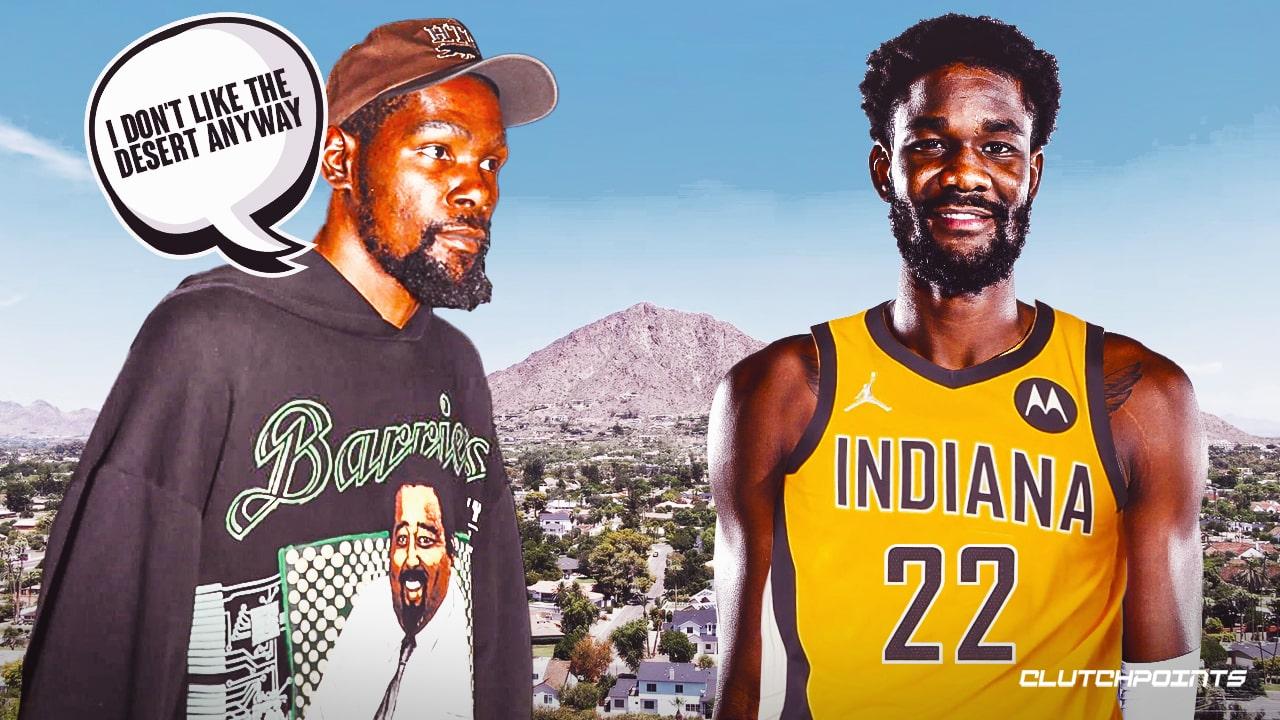 Just hours before NBA free agency opened up two weeks ago, Kevin Durant shocked the NBA world by announcing that he had requested a trade from the Brooklyn Nets. The Nets were likely caught off guard as much as anyone. They had just finally re-signed Kyrie Irving and were looking to run it back with new trio of Durant, Irving and Ben Simmons. Instead, the all-time great appears to be forcing the Nets hand to deal him. Durant leaked his preferred destinations, with the Phoenix Suns atop the list. In order for that trade to happen, a Deandre Ayton sign and trade likely would have had to be included.

Well, on Thursday that possibility was thrown out the window. ESPN NBA Insider Adrian Wojnarowski reported that the Indiana Pacers and Ayton have agreed upon the largest offer sheet in NBA history. The offer sheet is for four years, worth $133 million.

Ayton signing this offer sheet throws a massive monkey wrench into the plans for the Suns. Phoenix now has until midnight on Saturday to match the offer sheet. Now, it needs to made clear that technically the 48 hour clock has not started. The Suns could still accomplish a sign-and-trade with Ayton prior to midnight Thursday to land Durant. But that seems highly unlikely at this point.

Assuming that blockbuster is not made Thursday, there is essentially no chance the Suns trade for Kevin Durant. Here is why.

At this point, the Phoenix Suns have two options. They either must match the offer sheet given by the Pacers. Or, they let Ayton go for nothing.

The Suns and Ayton had been in contract extension discussions for months. The franchise essentially made it clear that they do not view Ayton as a max player. ESPN’s Brian Windhorst repeatedly talked about that. If that is the case, and they stand by that, they will let the big man walk. However, if Ayton leaves Phoenix for nothing, that is a huge asset walking out the door.

.@WindhorstESPN reacts to Deandre Ayton agreeing to a max offer sheet with the Pacers:

"[The Suns] do not believe Ayton is a max player." pic.twitter.com/IkPUrdCY3s

As I mentioned, in order for the Suns to pull off the trade for Durant, they likely would need to include a sign-and-trade with Ayton. Mikal Bridges, other pieces and draft capital also likely would have been required. But a trade without Ayton does not sound feasible, considering the Nets requests.

Tyrese Haliburton leads the NBA with this shocking stat

If Phoenix ends up matching the offer sheet, they still cannot trade Deandre Ayton until at least January 15th. Once any NBA player signs an offer sheet, they cannot be a part of any sign-and-trade either. So, that completely takes those options off the table for Phoenix.

Not to mention, that if the Suns match the Pacers offer to retain Ayton, the center now has veto power over any trade in the future. If he doesn’t want to go to Brooklyn who would appear to be starting over, he could simply say no. Making things even more interesting is the fact that if the Suns match the offer, they will enter the luxury tax for the first time since 2009. Generally, Phoenix has been fiscally responsible and would prefer not to do that.

However you slice it, Thursday’s developments have all but crushed the hopes of the Suns trading for Kevin Durant. A package of Mikal Bridges, Jae Crowder and a couple late first-round picks just won’t get it done.