There was a time when Jungle Boy and Luchasaurus were one of the biggest babyface tag teams in AEW. Two-thirds of the now-defunct Jurassic Express alongside Marko Stunt, JB, and Luchasaurus, won dozens of matches, beat many of the top tag teams in AEW, and even won the tag team championships after securing the W over the Lucha Brothers on an episode of Dynamite booked at the same venue as Full Gear 2022, The Rock in Newark, New Jersey.

Had things remained copasetic, Jack Perry and his Dinasaur would likely still be working meaningful tag matches in AEW and may even be competing against The Acclaimed on Full Gear today, but alas, the arrival of Christian Cage, who globbed on with the team, changed that forever; Cage seemingly worked his way into the ear of Luchasaurus and by the end of their title reign, which came at Road Rager 2022 against the Young Bucks, the duo were ready to rid themselves of Perry once and for all. Cage and Luchasaurus turned on Perry and over the proceeding months, made it their mission to attack the second-generation entertainer every chance they got.

Fortunately, at Full Gear, Tony Khan gave Perry a chance to settle the score once and for all and did so in the best way imaginable to avoid outside interference: a cage match. 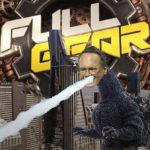 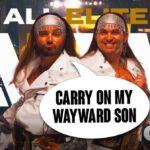 Taking the ring in the opening showdown of the, um, show, Perry and Luchasaurus worked a stiff, hard-hitting match that saw the former lawn-darted into the cage, spiked onto a chair, and tombstoned into seeming submission, but in the end, the rage that burned inside of Jungle Boy outlasted everything his former friends threw at him. Perry nailed his former friend with a Flying Elbow off the top of the cage and then choked him out with the Snare Trap until Luchasaurus tapped. Perry won this battle, but in the end, the war won’t be over until Cage is taken care of.

High in the sky, @boy_myth_legend risks it all for the fight of his life!