Tom Thibodeau is once again in line to lead an NBA franchise, this time the New York Knicks. While the former Chicago Bulls and Minnesota Timberwolves head coach remains in the mix alongside some other qualified candidates, Charles Oakley believes that it is more or less Thibodeau’s job to lose at this point in the process.

Oakley expressed his belief that Thibodeau is locked to be the next head coach in the Big Apple due to his relationship with new Knicks president Leon Rose — who is Thibodeau’s former agent.

“There it is then,’’ Charles Oakley recently told the New York Post. “They already know then. You know what I’m saying. That [relationship] goes a long way.’’

As it stands today, the Knicks have interviewed 11 head coaching candidates in all over the course of the last six weeks. In addition to Tom Thibodeau, some of the more notable candidates that remain in the mix for New York’s head coaching job include Jason Kidd, Mike Woodson and Kenny Atkinson. 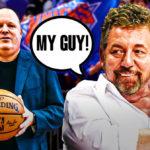 For what it’s worth, Thibodeau seems confident that he will get the job, as he has been reportedly watching the team’s game tapes already.

The Knicks have become one of the worst teams in the league after finding some success during Carmelo Anthony’s stint with the club earlier in the decade. However, the ‘Bockers have not reached the postseason since all the way back to the 2012-13 season, as the team’s young core has yet to fully develop into a legitimate contender.