You can add one more coach that is interested in the New York Knicks‘ head coaching vacancy.

Mike Fratello, who last served as a head coach in the NBA for the Memphis Grizzlies during the 2005-06 season, has publicly stated his interest in the Knicks’ head coaching vacancy, via Brian Lewis of The New York Post:

“I just want one more big headache. How about that?” Fratello said, adding all the top teams used triangle principles, so he would, too. “San Antonio does it. Golden State has incorporated it. There’s a number of teams that have parts of the triangle that they use. They just don’t use the same wording as Phil and as his great assistant, Tex Winter, did over the years. So you can find a place for it in your offense.”

Although the current telvision analyst has never won a championship or even advanced past the second round of the playoffs, he is an extremely experienced head coach. He served as head coach of the Atlanta Hawks from 1983 until 1990, the Cleveland Cavaliers from 1993 to 1999 and the Grizzlies from 2004 until 2006. He ranks 18th in all-time regular season wins.

Having said that, Fratello is 69 years old and hasn’t coached in the NBA in a full decade. The Knicks might be hesitant to hire a guy who hasn’t been around the league for a while.

However, Fratello is playing his cards right. He is publicly vouching for the triangle offense, which is a necessity if you’re coaching under Phil Jackson, the president of the franchise. 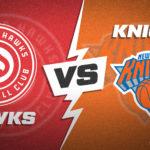 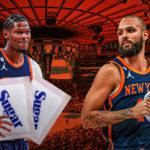 While Fratello may be a long shot considering Kurt Rambis continues to act as head coach for New York at the NBA combine, crazier things have happened in basketball.