Why did Kawhi Leonard suddenly sign an unexpected $176 million contract with the Clippers?

Heading into this free agency class, there was a lot up in the air. Where would Kyle Lowry, DeMar DeRozan, and Lonzo Ball go? What moves would the Lakers make to improve after LeBron James‘ first round playoff exit? Among so many unknowns, the one near-certainty, at least internally, was the expected return of Kawhi Leonard to the LA Clippers.

Following weeks of public criticism, rumors, and speculation as to what he would do, Leonard and the Clippers agreed to a deal that would bring the two-time NBA Finals MVP back to Los Angeles.

“Kawhi is a transcendent player and a relentless worker who improves himself every day,” Clippers President of Basketball Operations Lawrence Frank said in a statement. “We share many of the same goals, which include a long-term relationship. This agreement marks another important moment for our franchise and our fans, as we strive to create a championship-caliber organization, where players find the success and fulfillment they seek. We’re eager to continue building with Kawhi. For now, we will do whatever we can to support him in his recovery from injury. We look forward to seeing him back where he wants to be, on the court with his teammates.”

Before the details of the new contract were even announced, Kawhi Leonard was seen supporting the Clippers’ Summer League team with Paul George, Reggie Jackson, Terance Mann, Luke Kennard, and Marcus Morris.

While none of this was surprising, the contract Leonard and the Clippers agreed did catch some people off guard.

Another option would’ve been for Leonard to opt into the final year of his deal and extend for another four years. That would’ve locked him into a deal with the Clippers through the 2025-26 season and had him paid over $50 million for that final season.

Instead, Kawhi and the Clippers agreed to a four-year, $176 million deal, with a player option. The deal was arguably the most surprising because it offered him the ‘least’ amount of money. What it did, however, was tie him up with Paul George.

Following the bubble season, Clippers star Paul George, who was entering the final year of his contract, agreed to a four-year extension with the franchise. That extension kicks in this year and has a player option for the final year as well.

Here’s a breakdown of both George and Leonard’s identical four-year deals, via Spotrac. 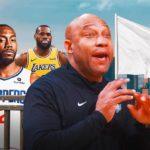 The deal now means Leonard and George are tied to one another for at least the next three seasons. The 2024-25 season, which both players have player options for, is the same season the Clippers have been aiming to open their new arena in Inglewood, California.

Leonard is expected to miss much of the 2021-22 season as he recovers from offseason surgery to repair a partially torn ACL. That gives he and Paul George at least two seasons in 2023 and 2024 to try and make a run at an NBA Championship before they’ll have to decide on their futures with the franchise.

Both have become engrained in their communities and have said they love being home, so it’s hard to imagine things going so far south that they both depart, but anything is possible in the NBA. Regardless of what happens in a few years, having two of the best players in the NBA together for the next few years puts the Clippers in a really good position to win a championship, when healthy, and keep fans excited at the same time.