Wizards’ Bradley Beal not fond of being on wrong side of history: ‘Nobody’s going to feel sorry for us’

The Washington Wizards suffered an 18-point loss to the Houston Rockets, but they were also torched for the most 3-pointers made in NBA history, as their opposition canned 26 on 55 attempts to break the record. Wizards shooting guard Bradley Beal wasn’t fond of coming out on the wrong side of history:

“It’s always terrible. It’s never a great feeling. I don’t give a damn about that. I don’t give a damn about how many threes they made,” said Beal after a 136-118 loss to the Rockets, according to Kelly Iko of The Athletic. “We lost, that’s all that matters. That’s the only stat that matters. I don’t care how many threes they made, we have to take it away, and we haven’t done that, and we haven’t done it on the road, and it’s frustrating, but nobody’s going to feel sorry for us, and we have to get ourself out of it.”

“But it’s the NBA,” added teammate Markieff Morris. “Doesn’t matter if we played last night. We do this shit on a regular basis. That’s what the good teams do.”

The Wizards have struggled again as of late and lost six of their last seven games, including the last two. They recently acquired reinforcements in the form of Trevor Ariza, whom they got in a trade with the Phoenix Suns, as well as Ron Baker, whom they got after he cleared waivers after being cut by the New York Knicks. 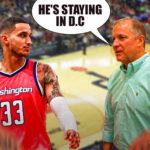 Washington is 12-20 on the season, yet only three games away from the eighth spot in the East, hoping to put this night of fireworks behind them and make the most of December before it’s too late to battle for a playoff spot.