Report: Brandon Knight is also in the mix for the Knicks

It is well documented that the New York Knicks are in pursuit of a veteran point guard to help mentor this year’s eighth overall pick, point guard Frank Ntilikina. Since the Knicks are devoid of cap space after signing guards Tim Hardaway Jr. and Ron Baker for a combined $80 million, the team is now looking to trade for a point guard.

The number one name that has been linked to New York via trade is the Suns’ Eric Bledsoe, but it’s unlikely the Knicks could land Bledsoe with their current crop assets. But according to ESPN’s Ian Begley, New York has also been in talks with Phoenix to acquire another one of their veteran point guards — seventh year man Brandon Knight.

Knight would seemingly be much more affordable for New York, but also holds a sizable cap hold at $13.6 million. Presumably, the Knicks would have to trade starting shooting guard Courtney Lee in order to acquire Knight. Teams have reportedly inquired about the availability of both Lee and Kyle O’Quinn, but it’s unclear if the Knicks have offered the two in a trade for Knight. 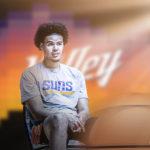 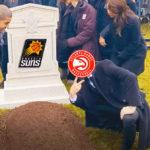 Knight is also coming off the worst season of his professional career, averaging just 11.0 points per game on a ghastly 32 percent shooting in 54 contests.

Another option for the Knicks would be to acquire Knight or Bledsoe in a multi-team deal for Carmelo Anthony, but New York has recently shelved the Melo trade talks for the time being.