Just when you thought the Matt Barnes fiasco with Derek Fisher was done with, it rears its head again.

After getting into an altercation with Fisher at the home of his ex-wife last summer, Barnes served a 2 game suspension, and the jabs have since continued on social media.

Barnes ranted about Fisher on New Years Eve on Instagram and, for good measure, released a handful of other barbs towards Fisher. Immediately after the Knicks fired Fisher in February, Barnes posted a photo of himself dressed up, only for Fisher to post a photo afterwards, leaving for vacation with Barnes’ ex-wife.

In late March, following the D’Angelo Russell–Nick Young recording incident, Barnes took another shot at Fisher on Instagram by posting a meme of the him on a podium with the words, ‘DEREK FISHER BE LIKE WHAAAAT GUY CODE DID RUSSELL VIOLATE?’

Apparently Fisher isn’t done either, because he posted a photo of Barnes’ ex-wife Gloria Govan and her two sons (from her marriage with Barnes) on Instagram on Sunday from the Angry Birds premiere, with the caption ‘Hope you enjoyed a nice relaxing day today! You deserve it! Happy Mother’s Day @glogovan’ 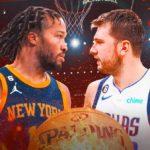 Needless to say,the posted picture was a calculated shot at Barnes.

This doesn’t seem to be losing steam anytime soon.  Following this trend, expect to see another Instagram post from Barnes soon in response.