The co-founder of the Big Baller Brand, Alan Foster, has countersued LaVar and Lonzo Ball for alleged fraudulent concealment and breach of contract, Mike Walters of The Blast reported on Wednesday.

Foster, who was sued in April for over $2 million and ousted from the company for operating a “fraudulent scheme” and secreting funds to take money from the company, accused LaVar of embezzling over $2.5 million from BBB and exploiting his own children for his personal wealth and fame. In the suit, Foster alleges LaVar diverted and spent company money to live up to his own extravagant lifestyle.

“In early 2016, in furtherance of LaVar’s intense desire to share in, or rise above, the glory and spotlight of his sons, LaVar approached Alan and asked for his business guidance on how to monopolize and gain fortune and fame from the names and likenesses of his three sons,” the document reads. “In response, Alan suggested that the two men brand the “Ball” family name in order to create basketball and entertainment-related businesses. LaVar loved Alan’s idea and wanted to make sure that he was the biggest star in the family, notwithstanding the fact that he was broke, had no savings, poor credit and zero business acumen.

“LaVar is a liar who fraudulently utilized BBB and BSG to fund his personal lifestyle.” 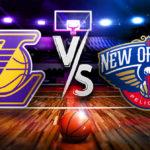 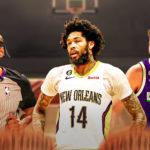 Foster was the former co-owner of Big Baller Brand and another sports and entertainment company set up by LaVar and his wife Tina, which they called “Ball Sports Group.”

The original lawsuit came at the heels of an ESPN report that revealed Lonzo was missing $1.5 million from personal and business accounts, which rendered him unable to file his taxes after funds were missing from both accounts.
Tags: Big Baller Brand, LaVar Ball, Lonzo Ball, New Orleans Pelicans
Just In