Jedd Pagaduan • 3 days ago
Shai Gilgeous-Alexander has emerged as one of the best players in the NBA in the early goings of the 2022-23 campaign. Through 17 games played, the 24-year old combo guard is averaging 31.1 points, 4.8 rebounds, and 6.3 assists on near 50-40-90 splits, continuing the linear progression he’s displayed over the course of his career with the Oklahoma City Thunder.

Thunder overreactions: Shai Gilgeous-Alexander will win MVP and lead OKC to a ring within five years

The Oklahoma City Thunder are an American professional basketball team that plays in the Northwest Division of the National Basketball Association's Western Conference. The Thunder were established in 1967 and they play their home games in the Chesapeake Energy Arena in downtown Oklahoma City, Oklahoma.

The Thunder have one NBA championship to their name, coming back in 1979. Then the Seattle SuperSonics, they defeated the Washington Bullets 4-1 in the 1979 NBA Finals to lift their first title.

Through the years, more than a handful of players have earned legendary status with the Thunder, including the likes of Gary Payton, Kevin Durant, Russell Westbrook, Fred Brown, Ray Allen, and Jack Sikma.

The Thunder proved to be one of the biggest surprise packages of the 2019-20 season. While they were considered as a lottery-bound team prior to the start of the campaign, they somehow managed to secure a spot in the playoffs in a ruthless Western Conference.

By trading away their best player in Chris Paul during the offseason, however, the Thunder engaged in a full rebuild for 2020-21. The good news for OKC is that they have a plethora of draft picks at their disposal, thereby guaranteeing a slew of young talent coming in over the next few years.

Right now, the Thunder's main man is Shai Gilgeous-Alexander. The 6-foot-6 combo guard arrived in Oklahoma in 2019 as part of the blockbuster trade that sent Paul George to the Los Angeles Clippers. Still in his early 20s, SGA has a bright future ahead of him as he looks to take on the role of the Thunder's cornerstone star for the foreseeable future. 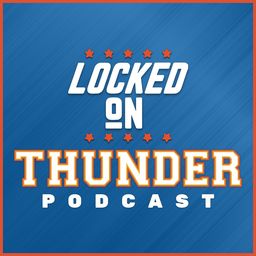 Locked On Thunder - Daily Podcast On The Oklahoma City Thunder 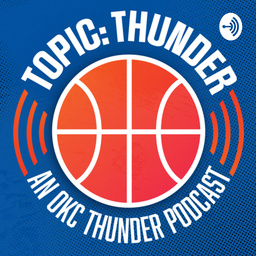 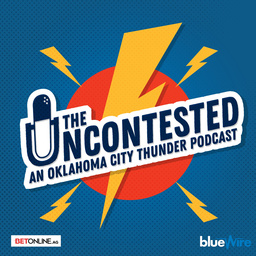 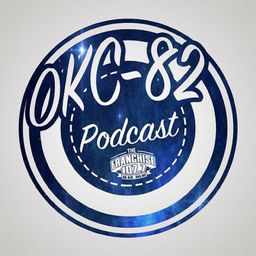 OKC THUNDER
@okcthunder • 7h
It was a strong defensive effort for the Thunder that allowed things to remain within reach all night. @NickAGallo and @ParisNLawson recap the contest.
Brandon Rahbar
@BrandonRahbar • 8h
OKC has a -1.8 point differential on the season. 4 of their last 6 losses were by 5 points or less (2 in OT). Mostly a competitive team in a lot of close games. OKC also has the 6th best odds to draft Victor Wembanyama or Scoot Henderson. Ideal Thunder results thus far.
Andrew Schlecht
@AndrewKSchlecht • 9h
This Suns Kings game is some of the most fun basketball I’ve watched all season. Insanely fast paced, ball is moving… dunks! 3s! So fun
Andrew Schlecht
@AndrewKSchlecht • 9h
Shai Gilgeous-Alexander just continues to show he can carry a team. Shot poorly from the field (7-21) but continued to find a way. 16-18 from the line and gave the Thunder a chance.. The Thunder shot 37% from the field (34-92!!!) and still had a chance at the end because of SGA
OKC THUNDER
@okcthunder • 8h
Relying on habits and our foundation.
OKC THUNDER
@okcthunder • 8h
Gave ourselves a chance tonight.
Brandon Rahbar
@BrandonRahbar • 9h
Good bounce back from OKC after the Rockets loss. Came back down 13 vs a good Pelicans team and had a chance to win at the end. Ups to Herb Jones for playing the best D we've seen on SGA this year. Ups to SGA for scoring 31 despite Herb & despite playing butt-hurt (literally).
Boomtown Hoops
@BoomtownHoops • 9h
Shai’s 31 wasn’t enough to beat the ‘Cans. #ThunderUp 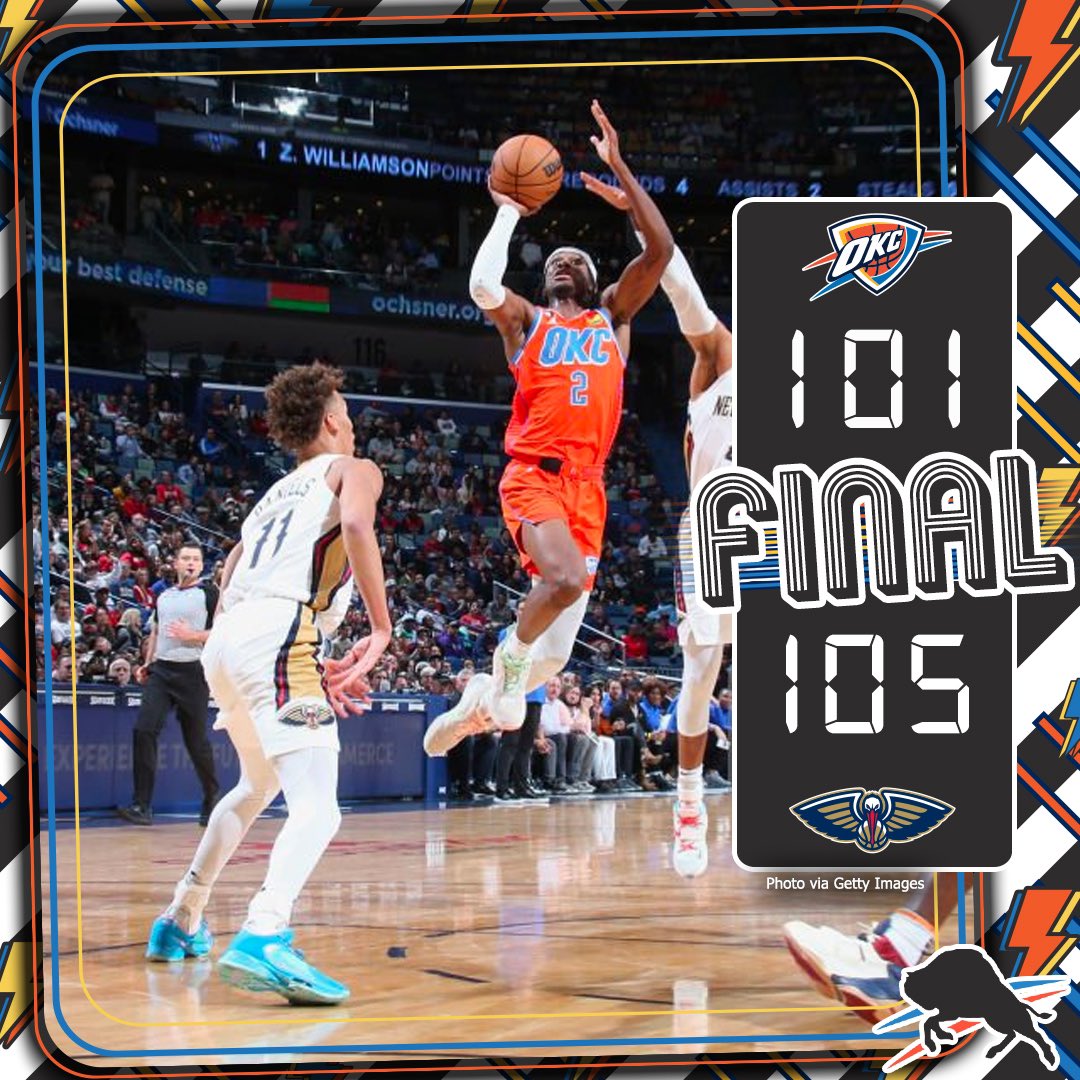 How Many Future First-Round Picks Do The Thunder Have?

Through 2026, the Thunder could have up to 17 first-round picks.

OKC was able to amass this collection via a number of trades, which includes the Russell Westbrook deal to the Houston Rockets (2019), Paul George to the Los Angeles Clippers (2019), Jerami Grant to the Denver Nuggets (2019), Chris Paul to the Phoenix Suns (2020), and Danny Green to the Philadelphia 76ers (2020).

Should The Thunder Package Any Of Their First-Round Picks In A Trade For A Star?

The biggest set of assets the Thunder currently have in their possession is their massive collection of first-round picks. To be exact, they could have up to 17 first-rounders through 2026.

After parting ways with Chris Paul during the offseason, OKC is now without a bonafide superstar. Shai Gilgeous-Alexander has the makings of a cornerstone star, but he still isn't there quite yet. As such, it wouldn't be such a bad idea for the Thunder to flip a number of their first-rounders in exchange for a star.

Using all 17 of their first-round picks over the next five years is going to make the Thunder a very young (and inexperienced) squad. Trading a few (or even several) of them to an opposing team looking for a fresh start could expedite the Thunder's quest to become a legitimate title contender.

How Long Has Sam Presti Been General Manager Of The Thunder?

The Thunder hired Sam Presti as the team's general manager in the summer on June 7, 2007 -- at just 30 years of age. At that time, the Thunder were still the Seattle SuperSonics.

One of Presti's first moves as a GM was drafting Kevin Durant with the second overall pick in the 2007 NBA Draft. It was an undeniably excellent start to what has turned out to be a successful tenure for Presti.

More recently, Presti made waves in the NBA by collecting a massive haul of future draft picks for the Thunder. Presti traded away stars such as Russell Westbrook, Paul George, and Chris Paul, flipping them into an array of draft picks. By doing so, the high-ranking team executive virtually guaranteed the franchise's future for many years to come.

Most experts believe that the Thunder won't be very competitive in the 2020-21 season. They lost their best player in the offseason in future Hall of Fame point guard Chris Paul, who was one of the biggest reasons why this team was able to make an unexpected playoff run in 2020. Other key losses include Sixth Man of the Year runner-up Dennis Schroder, Steven Adams, and Danilo Gallinari.

OKC's offseason dealings point to the fact that this squad is still in its rebuilding phase, and as such, they aren't likely to compete for a playoff berth in 2020-21.

You might say that this was the exact same predicament the Thunder found themselves in last season. The critics counted them out early on, and they certainly proved their doubters wrong. However, as pointed out above, the loss of Chris Paul, as well as a few other vets, will have a significant impact on OKC's playoff hopes in 2021. Simply put, they're just not the same team.

Will The Thunder Sign Shai Gilgeous-Alexander To A Long-Term Extension?

Not many experts could have foreseen how valuable Shai Gilgeous-Alexander would turn out to be for the Thunder when the Los Angeles Clippers included him in the Paul George trade back in the summer of 2019. Since then, the 6-foot-5 combo guard has demonstrated the potential to be a cornerstone superstar for OKC.

SGA currently has two more years remaining on his deal, which will expire in the summer of 2022. At this point, it would be a travesty if the Thunder let him walk away as a free agent next year.

The Thunder brass understand just how important Gilgeous-Alexander is to the future of this franchise, so it only makes sense for OKC to sign Shai to a long-term extension sooner rather than later.

How Much Are The Thunder Worth?

According to Forbes, the Oklahoma City Thunder franchise has a net worth of $1.575 billion as of February 2021.

The Thunder are currently owned by Clay Bennett, under his company Professional Basketball LLC. Bennet purchased the franchise back in 2006 for the sum of $325 million.

According to Forbes, the franchise earned a revenue of $236 million during the 2019-20 season.

Who Owns The Thunder?

The Thunder franchise is currently owned by a private company named Professional Basketball LLC. It is an investment group founded in 2006, headed by Clay Bennett. Bennett is an American businessman who previously also held an ownership share with the San Antonio Spurs.

Bennett purchased the Thunder franchise in 2006 for $325 million.

Who Is The Thunder's Head Coach?

After parting ways with Billy Donovan during the offseason, the Thunder promoted former assistant Mark Daigneault as the squad's head coach for the 2020-21 campaign. At just 35 years old, Daigneault is the second-youngest coach in the NBA right now, after Minnesota Timberwolves head coach Ryan Saunders.

Daigneualt started his professional career as head coach of the Florida Gators between 2010 and 2014. He then took over the helm as the shot-caller for the Oklahoma City Blue, the Thunder's G-League affiliate, from 2014 to 2019. He then served as an assistant to Donovan during the 2019-20 season.

Who Are The Thunder’s Assistant Coaches?

Who Are The Best Thunder Coaches Of All Time?

Since their move from Seattle, the Thunder have had a grand total of just four head coaches, with the fourth being Mark Daigneault, who took over the team during the 2020 offseason.

PJ Carlesimo was the Thunder's first head coach, but his tenure lasted just 13 games at the helm. He was succeeded by Scott Brooks, who served as the team's head honcho between 2008 and 2015.

Having spent seven seasons with OKC, Brooks currently holds the record for the most regular season wins with 338. Brooks won Coach of the Year honors in 2010, and he led the Thunder all the way to the Finals in 2012.

Billy Donovan took over after Brooks' departure, and the former served as the squad's head coach from 2015 to 2020. Donovan's tenure featured five consecutive postseason appearances, with all but one of them ending in first-round exits.

Who Are The Top 5 Thunder Players Of All Time?

If we're talking about the Oklahoma City Thunder exclusively (and not players who suited up for the Seattle SuperSonics), then Kevin Durant is easily this franchise's greatest player of all time. Durant made his name as the primary superstar of the Thunder, bagging league MVP honors in 2014.

Durant's former partner-in-crime, Russell Westbrook, is a close second, who himself also won the MVP award three years after KD. It was Westbrook who took over the helm for the Thunder when Durant unceremoniously packed his bags in the summer of 2016 to join the Golden State Warriors.

A few other names that have made a significant impact for the franchise include James Harden, Serge Ibaka, and Chris Paul (despite playing just one season with the Thunder).

Who Are Thunder Legends?

The Thunder were established in 2008 after the now-defunct Seattle SuperSonics migrated to Oklahoma City. As such, there are only a handful of players who have attained legendary status for the franchise.

Kevin Durant tops that list, with the former MVP leading the squad to five straight playoff appearances between 2010 and 2014, including a memorable trip to the Finals in 2012.

Another Thunder legend is none other than Durant's former partner-in-crime in Russell Westbrook. The nine-time All-Star bagged the MVP award in 2017 after historically averaging a 31.6-point, 10.7-rebound, 10.4-assist triple-double throughout the season.