Russell Westbrook finally got his first win as a member of the Washington Wizards, doing so against his former frenemy in Kevin Durant and the Brooklyn Nets on Sunday.

After their slim 123-122 win in New York, Westbrook got the game ball after an incredible 24-5-10 evening and was asked to talk to the media right after.

Russ’ post-game interview with the crew of NBC went quite awkward, as technical difficulties stole the show. With all the COVID-19 protocols, distance interviews are the new normal, but on Sunday, technology clearly wasn’t cooperating.

Westbrook spent a good minute patiently waiting for the questions after the game, headphones and all. The crew was spitting out their questions, but their voices just weren’t going through. After a few moments of dead air (which felt like a decade), the point guard’s patience ran out.

“Come on man, come on D,” the Wizards star said as he tried to call out anchor Drew Gooden, who was on the call (via Rob Perez on Twitter). “There’s a football game on, man.”

this was quite enjoyable. pic.twitter.com/N5F5k947Sh

Nothing came about from the awkward interview and the producers had to cut away from the live feed. 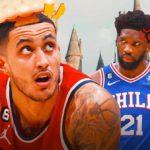 It’s the last game week of the regular season in the NFL, so it hard to blame Russ’ haste. There were a few marquee matches on right after the Wizards’ game, and the former MVP just wanted his weekly dose of Sunday Night Football.

Unfortunately, Russell Westbrook’s Dallas Cowboys were eliminated from playoff contention on Sunday, so he might need to root for another team come postseason.

Still, Westbrook getting his first W with his new team should’ve felt so good for him.