Milwaukee Bucks star Giannis Antetokounmpo had the misfortune of being exploited by a Twitter hacker on Thursday afternoon.

The hacker posted crude and even racist messages after gaining control of Giannis’ account. Fortunately, Antetokounmpo’s younger brother, Kostas, was playing the role of internet watchdog.

Kostas immediately responded to each of the fake tweets, noting his brother was not the one responsible for such repulsive messaging: 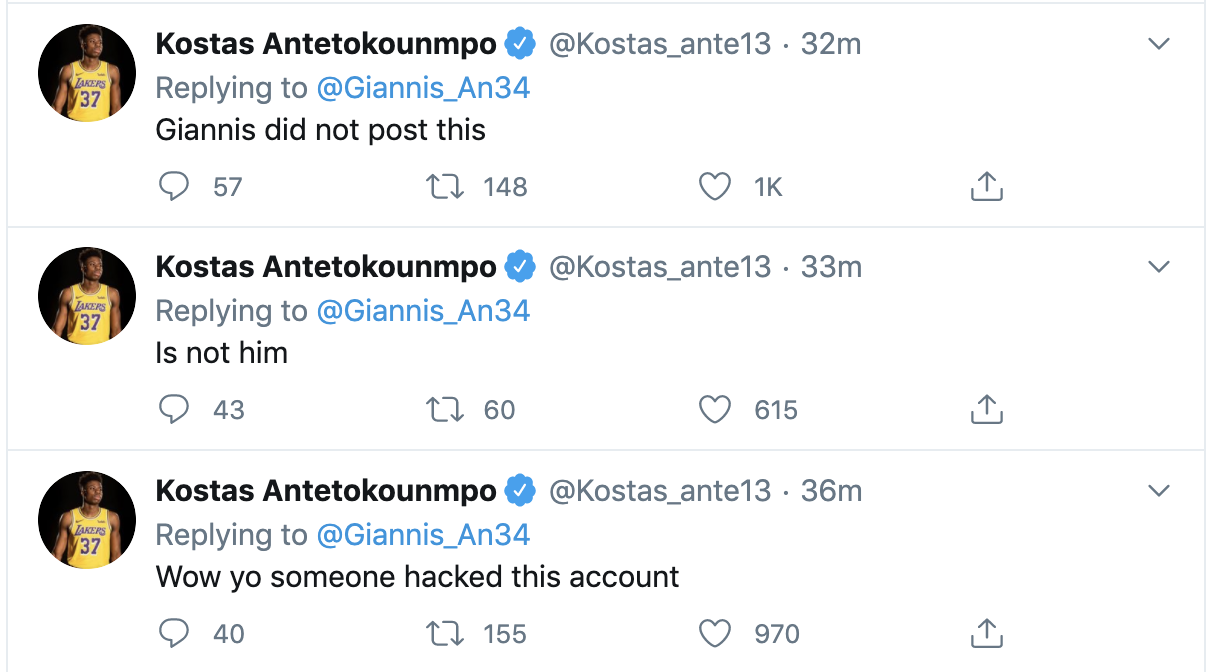 Some of the tweets were also directed at Golden State Warriors point guard Stephen Curry and even Antetokounmpo’s Bucks teammate, forward Khris Middleton.

Luckily, Kostas was quite vigilant and likely played a large role in getting control over the situation. The tweets have since been deleted.

It comes as no surprise hackers would target Giannis. After all, he is the reigning MVP, and he has an enormous platform. Antetokounmpo has one million Twitter followers, and anything he says via social media is sure to garner a lot of buzz.

But Kostas has big brother’s back.

Kostas, who plays for the Los Angeles Lakers, has quite the tight bond with his siblings. The Antetokounmpo brothers have spoken at length about their desire to make their father proud by supporting one another and rooting for each other’s success.

Middleton is among those who have witnessed the bond the family shares, with Giannis and Thanasis both playing together in Milwaukee.

Via Eric Woodyard of ESPN:

Middleton has been with Milwaukee since Giannis came into the league in 2013, but he said he’s seeing a different side of the reigning MVP this season with his brother on the roster.

“You see them talking, joking and how they treat one another,” he said. “You can just tell how they were raised to be tight and close-knit.”

The Antetokounmpo’s look out for one another, through the ups and downs.

On Thursday, it was Kostas who was quick to support Giannis.

Jets’ Joe Flacco expected to back up Sam Darnold for first time vs. former team Broncos