Albert Pujols on the verge of breaking Barry Bonds’ record after throwback performance vs. Rockies Year 2005 called and it wants Albert Pujols back. The future Baseball Hall of Famer dug deep Wednesday night and brought back memories of his dominant past when he put together a masterful performance in the St. Louis Cardinals’ 9-5 win over the Colorado Rockies on the road. Pujols went 4-for-5 with a pair of runs and two RBIs, and The Machine also blasted a home run in the bottom of the sixth off Rockies lefty Austin Gomber who just became the newest member of the Albert Pujols Home Run Victim Club.

It’s just a sweet blast for Pujols, especially when considering the fact that it was also at hitter-friendly Coors Field where he knocked his first career hit way back in April 2001.

What’s even better is that the home run off Gumber put Albert Pujols just two home runs away against different pitchers from breaking Barry Bonds’ all-time record, according to John Denton of MLB.com.

“1B Albert Pujols hits a no-doubter of a home run for the 687th HR of his career. He is now just nine HRs shy of tying Alex Rodriguez for 4th in MLB history. Also, he has homered off 448 pitchers — one shy of Barry Bonds’ MLB record of 449.” 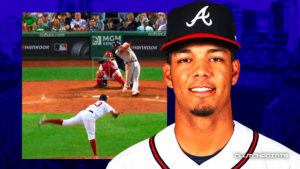