Shane Larkin opens up about his mental health issues

Current unrestricted free agent Shane Larkin, who was last with the Boston Celtics, is the latest to add his name to the rapidly-growing list of NBA players who have recently opened up about their own personal mental health issues.

Larkin offers a new perspective on the matter, as he shares his severe case of obsessive-compulsive disorder or OCD. According to the 25-year-old, his family knew about his condition, but did not necessarily address the problem the right way.

“My dad would test me,” Larkin relayed to Jackie MacMullan of ESPN. “He’d go to the bathroom and purposely not wash his hands, then touch my arm. He’d say to me, ‘You’re good. You can do this.’ That was his solution. It was so difficult — and it caused problems between us.”

For Larkin, disclosing his condition to anybody outside his family was definitely not an option.

“I didn’t want people to think I was some kind of weirdo,” Larkin claimed.

The 5-foot-11 guard eventually got some help, and he was given prescription drugs to treat his illness. However, it had some unwanted side-effects that turned out to be too much for Larkin to handle. 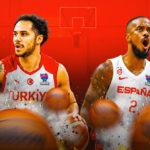 “The medication flat-lined me,” Larkin said. “It made me way too relaxed — too chill. I felt like I needed to be on edge to be the competitor I wanted to be. When I was on the medication, it was like, ‘Eh.’ I told my mom, ‘There’s no way I can continue with this.”’

This is definitely one of the drawbacks of prescription medication. Nevertheless, it is still considered by most as the better alternative as opposed to living in pain.

The issue of mental health in the NBA has snowballed, and we can only expect it to get even bigger in the coming weeks.