The Donovan Mitchell trade saga between the New York Knicks and the Utah Jazz took an intriguing turn on Thursday after reports emerged that it was a “done deal,” and that the announcement was coming “shortly.” Nothing materialized over the succeeding hours, which led to a bit of a civil war on the mean streets of Twitter.

For starters, here is the initial report from a supposed Jazz team insider. Note that this report has not been verified:

This naturally sent Knicks fans into a frenzy as they awaited the official announcement of their supposed Donovan Mitchell coup.

BRO YALL NEED TO STOP TELLING ME DONOVAN MITCHELL TO NY IS CONFIRMED. IVE BEEN GLUED TO MY PHONE AND MY BOSS IS ALREADY UPSET WITH ME.

Heading to Utah to get Knicks Twitter some answers about the Donovan Mitchell trade.

If one thing is wrong, it’s all wrong,

“I’m receiving text as we speak that the Donovan Mitchell deal is done. It’s agreed upon. They are working out some final details to have it BE ANNOUNCED SHORTLY.”

Several reporters then chimed in, sighting their own sources. As it turns out, there actually wasn’t much progress between the Knicks and the Jazz:

We are going to have a lot of these days but hearing that chatter of a Knicks deal for Donovan Mitchell being done is not accurate – nothing imminent.

Transparency time, even if weak:

Multiple people have told me something like PK’s report today… sources with different connections.

But rumors travel fast in this business. And other notable sources believe that everything is basically as it was 24 hrs ago.

So: I don’t know. https://t.co/mkMKednJtG

Given that there has been no official announcement — at least as of writing — we’re inclined to believe that nothing is indeed imminent in terms of Mitchell’s blockbuster trade to the Knicks. Then again, it’s also possible that the supposed deal encountered some sort of last-minute hitch, thereby causing a delay in the same. At this point, we just don’t know.

It is also worth noting, however, that Donovan Mitchell himself added fuel to the flame by coming out with a rather cryptic tweet around the same time the initial report emerged. To be fair, all he said was that “god is good,” but more than a few folks were quick to translate it as the Jazz star indicating that he was indeed headed home to New York. 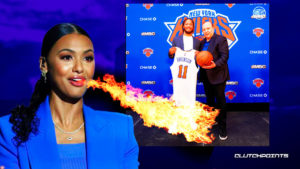