At the start of the season, the Los Angeles Lakers looked like they were going to be the top seed in the Western Conference again. However, with injuries to superstars and role players at different times, the team might even have to participate in the Play-In Tournament.

The downturn of the Purple and Gold has led former Lakers, Isaiah Thomas and Quinn Cook to desire to help out the team.

Man I feel you!! You ain’t the only one big bro!

Killa!!! You know what it is, you’ve proven that year after year . Stay ready. We back on real soon 🏁

Thomas played a few games for Los Angeles in the 2017-2018 season and last suited up for the New Orleans Pelicans on a 10-day contract. On the other hand, Cook was with the team from 2019-2020 before being waived last February and signed a pair of 10-day contracts with the Cleveland Cavaliers.

The Lakers have a mixed, regular-season schedule ahead of them in terms of difficulty. They have easy assignments like the Houston Rockets and challenging ones, such as the Phoenix Suns. 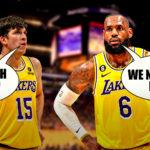 Should the Los Angeles roster get fully healthy in the postseason, they would have to be one of the strongest low seeds in history. Of course, it would still be best if the team can move up the standings and avoid the Play-In Tournament altogether.

With an older team, wherein several players experienced injuries of varying degrees, having fewer games and wear and tear would do wonders in trying to defend the title.

Should the Lakers be in the Play-In Tournament, their possible matchup with the Golden State Warriors would be one to keep an eye on. Just imagine a superstar duel between LeBron James and Steph Curry early on.