Despite the recent trade rumors linking them with each other, Brooklyn Nets playmaker Kyrie Irving and Los Angeles Lakers guard Russell Westbrook don’t seem to have any ill feelings towards each other. At the very least, they have no problem working together.

Irving and Westbrook were recently spotted putting in the work together in a lab. The two underwent the same training on going through the traffic and finishing, although they did not exactly work directly together.

Kyrie & Russ working out together is hilarious with all due respect pic.twitter.com/sN7omuVPEw

Of course, this is not surprising in the NBA. Players often work with similar trainers, and this situation with Kyrie Irving and Russell Westbrook appears to be the case. They are professionals in the first place.

Still, it’s hard not to think or theorize what that means since the talks have been about the two being potentially swapped for each other. The Lakers have long been rumored to be interested in Irving and reuniting him with his former Cleveland Cavaliers teammate LeBron James, but for the Purple and Gold to pull off such a trade, they would need to move Westbrook and his monster contract.

The talks for an Irving trade have cooled down in the past few weeks since the Nets are focused on trading Kevin Durant instead. Should Brooklyn be able to move KD, they are expected to turn their attention to their superstar guard. It remains to be seen when will that happen, but clearly, nothing is imminent at the moment.

As for Westbrook, the Lakers seem to be gearing themselves for the possibility of keeping him this 2022-23 season. 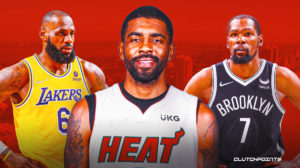