Los Angeles Lakers guard Lonzo Ball came into the 2017-18 season surrounded by a ton of hype, fresh out of UCLA and a literal marketing machine behind him in his father LaVar Ball.

While Senior Ball was correct that his son would make it to the Lakers as a pro, he didn’t quite hit the mark on his son carrying the team to the playoffs. Currently, the Lakers sit at 32-41 and 11th in the Western Conference.

Ball himself has only played in 51 of the team’s 73 games, and he wasn’t the team’s biggest producer which had some questioning his status as a bust earlier in the year.

It’s overkill to declare the rookie point guard a bust who has shown flashes of what he can do in the league, including playing solid defense on opposing point guards.

Statistically, Ball had been compared to some of the league’s Hall of Fame talents, including Jason Kidd, who had a similar type of game to Ball. It’s not difficult to pull in similarities from two young California college kids who play point guard and loves to pass the ball in transition.

Kidd welcomed the early comparisons but also called it ‘a stretch’ when asked about his career in the same breath.

After a few comparisons and a larger sample of games, Ball doesn’t appear to be as bad as his detractors make him out to be.

Big Baller Brand did not come to Staples Center and take over Showtime, but Ball has managed to play well enough that his stats towards the end of the season are looking eerily similar to that of a rookie Jason Kidd who turned out to be an elite point guard and a champion, even with a suspect jump shot throughout his career. 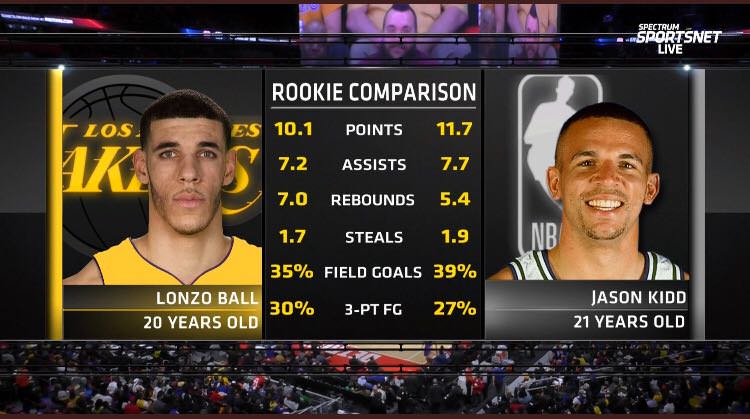 Ball has been challenged and pushed by competition due to his father’s boastful ways, but he also has a full career ahead of him and nowhere to go but up.