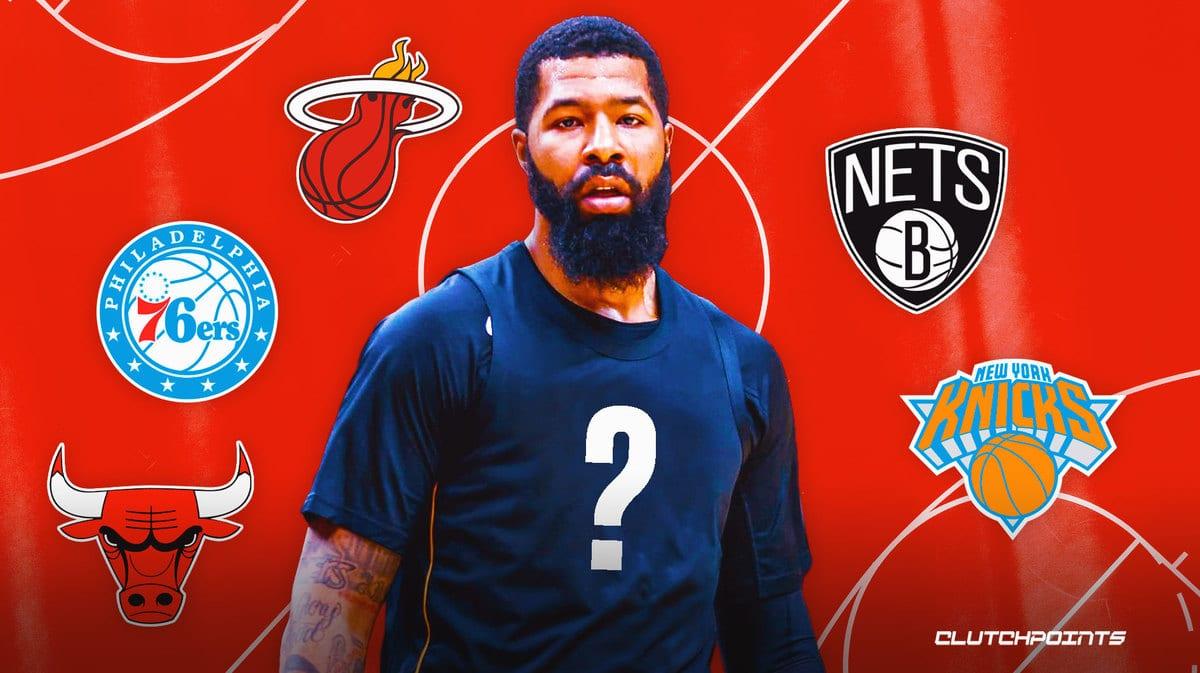 While the most notable names in NBA free agency are off the board, there are still some quality free agents that remain unsigned. One guy who is still searching for a roster in the upcoming season is Markieff Morris. The 11-year NBA veteran most recently played for the Miami Heat. It also is worth noting that he missed an extended period of time after being blindsided by Nikola Jokic last year.

Largely due to the missed time, Morris was never able to find his stride last season. He played in just 17 games and averaged 7.6 points, 2.6 rebounds, and 1.4 assists. At 32 years old there is reason to believe Morris still has some production left in the tank. He is a serviceable rotation piece on a playoff team and will look to prove this once again. Here are the three teams who could benefit the most from adding the veteran.

The Sixers have clearly made an effort to get tougher this offseason. The addition of PJ Tucker was their biggest move and the organization clearly believes his toughness will be infectious. They added a few other pieces to fit this category including Danuel House, Trevelin Queen, and De’Anthony Melton. Markieff Morris fits the exact type of player they are targeting and could be the player the organization always hoped Mike Scott would be.

Morris has also publically made it known how he would like to sign with the Sixers. The Philadelphia native continues to be active in the Philly community and would love to make an impact on his hometown team.

Source: Markieff’s preference is to play for the Philadelphia 76ers. Markieff grew up in North Philadelphia and won a Philly Public League & two PA State Titles at Prep Charter. The Sixers are still weighing their options but have given this a thought. https://t.co/JJUAjYRNrN

The biggest hurdle the Sixers need to clear is the lack of available roster space. The team currently holds 16 players for 15 spots and must settle this before the regular season. While this is common for teams to bring extra guys into training camp it would not make sense to bring Morris in unless they truly intend on him being on the roster. Daryl Morey continues to work the phones and it is certainly possible there is another trade made that could create an open roster spot. Matisse Thybulle and Furkan Korkmaz continue to be the names most likely to be moved. If there is a roster spot it would be awesome to add Markieff Morris to the team. He still possesses toughness and a playstyle the team has been lacking and would provide excellent depth behind PJ Tucker.

It is clear that last season did not go as planned for Markieff Morris. He never found his stride with the team last but should remain open to giving them another chance. The biggest reason for this is the loss of PJ Tucker. The two play a similar role and style and Morris would have much more opportunity in this coming season. While Tucker is a more versatile defender, a lot of the attributes that he brings can be seen in Morris as well. The 6’8″ forward would be able to fill the starting role that Tucker occupied last year and give it a second shot with the organization.

The 2020 NBA Champ clearly fits into Heat Culture and did not get a chance to show his abilities on the court last year. Wiping the slate clean and running it back this season could have positive results for both sides.

Another organization that would benefit from the veteran presence of Markieff Morris is the Chicago Bulls. The franchise has struggled to flip the switch into win-now mode and needs some quality role players to help with this. Morris could also be valuable in the development of Patrick Williams. Some have questioned the mentality of the 20-year-old and Morris could help to toughen him up and prepare him better for the NBA.

Expectations will be increased for the Bulls this season and the franchise must be prepared. While top-end talent tends to get the majority of the credit and blame, having proper fitting role players is also crucial. Chicago has their core in place and will be looking to take the next steps this season. Adding Markieff Morris as a key role player would help with this and provide the roster with a style of player they currently lack.

He may not have signed yet but this should not be taken as a sign there is no interest for Markieff Morris. The veteran will certainly want to wipe away last season from his and the public’s memories. Expect him to be a surprise this season and make a solid impact once again. Morris is the type of player that every contender could use and expect him to make an impact wherever he lands next season.