Michael Vick: Remembering the 5 most epic plays of his NFL career

Michael Vick is arguably one of the most electrifying players in NFL history. He finished off his career with 22,464 yards and 133 touchdowns with four different teams. His 6,109 career rushing yards are an NFL record by a quarterback. He also became the first quarterback to rush for 1,000 yards in a single season, going for 1,039 in 2006.

Let’s take a look at his five most epic plays of his career.

Vick somehow escaped the sack and used his playmaking abilities to extend the play to gain positive yards. It was just his first playoff game of his career but he still managed to pull off the upset against the Green Bay Packers. Vick went on to finish the game with 181 total yards and one touchdown.

On the very first play of the game, Vick threw an 88-yard  bomb to wide receiver DeSean Jackson. This play broke a record as the longest first play from scrimmage in Eagles history. Vick went on to have one of the best games of his career, as he finished off with six total touchdowns. The Eagles dominated the Washington Redskins the entire game in a 59-28 victory.

During the 2005 season, Vick faked out the entire defense to rush for a one-yard touchdown against the Packers.  His long arms allowed him to extend the ball all the way out and then used his stellar speed he was known for to get the touchdown. Vick finished off the game with 209 passing yards and two touchdowns. He completed 20 of his 30 passes and only for 20 yards that game. 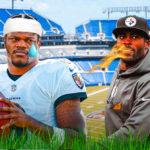 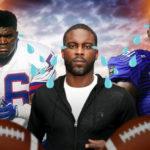 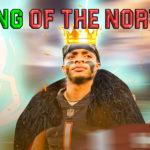 During the 2006 season, Vick showcased his astonishing speed and juking skills with a 51-yard run against the Saints. The Saints defender gets just enough of Vick to push him out of bounds, however, the QB still managed to gain 51 yards on the play. Vick went on to rush for 166 yards in only 12 attempts in that game. Vick’s 166 rushing yards was the most he had in the entire season and the second-most in his career.

Vick used his stellar speed to score the game-winning touchdown against the Minnesota Vikings. This legendary 46-yard touchdown run will always be remembered in his career. He finished the game off with 173 yards which is the most he ever had in his career.