Michigan football’sBig Ten title hopes just took a big hit. Star running back Blake Corum, who has been dealing with a knee injury, is expected to have knee surgery and miss the rest of the season, according to Ian Rapoport of NFL Network.

Rapoport adds that Corum should make a full recovery. The Michigan football star and Heisman Trophy hopeful had suffered the injury against Illinois two weeks ago.

He attempted to tough out the injury last week vs. Ohio State, even donning a knee brace.

But it quickly became clear that Corum was in pain and uncomfortable out there. He played the first series, handling a couple of carries before limping off to the sidelines in the first half of the victory.

Blake Corum did not return to the game. Now, his absence comes at the worst possible time, with Michigan football not only gearing up for the Big Ten title game against Purdue, but also for a potential national championship run.

The star runner was one of the best in the nation this year, tallying 1,463 rushing yards and 18 touchdowns in 12 games played.

Blake Corum was recently named the Big Ten running back of the year.

Now, Michigan football will have to attempt to win the conference without him.

Fortunately for the Wolverines, they just so happen to have a capable backup in Donovan Edwards, who helped ice the win over the Buckeyes with two monster plays. 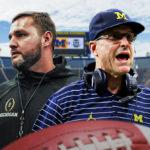 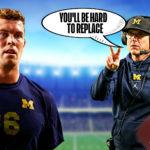 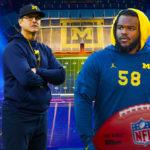 Edwards ran for a whopping 216 yards and has two 100-yard games under his belt this year.

If there’s any player who can step in and pick up the slack for Blake Corum, it’s Edwards.

Michigan football’s Big Ten title- and national championship- hopes are banking on it.